German death metallers GRIND INC. have set “Lynch And Dissect” as the title of their fourth album, due on May 21 via Bastardized Recordings. The CD was recorded at Catacomb Productions in Germany by Thomas Granzow and GRIND INC. and was mixed and mastered by Jörg Uken at Soundlodge Studios. The cover artwork was once again handled by Björn Goosses of Killustrations. Björn also makes a guest appearance on the new album on the track ‘Forced To Consume’. 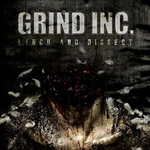 Tracklist:
01. Stillborn Paradise
02. Lynch And Dissect
03. Beyond Recognition
04. Damned To Vengeance
05. Praise The Light
06. Unasked Heirs
07. Decimate
08. Forced To Consume
09. The Debate From Within