Almost three years after their pummeling Gutter Earth EP was inflicted upon the masses, cold-blooded Elizabeth, New Jersey-based death metal insurgents GRIMUS have completed their first proper full-length, Omnicide.
With its members all hailing from a plethora of extreme metal acts including Iberian black metal outfit Windfaerer, Metal Blade tech/death act Allegaeon and others, the members of GRIMUS are united in hatred for humankind, their output surging with guttural, cutting-edge death metal prowess, with monolithic slams and swells of the most vicious kind infiltrating their uncompromising low-end attack. These atrocious features are grippingly captured on the quintet’s debut full-length album, Omnicide. The term literally meaning the killing of everything is a testament to man’s inherent, bloodthirsty nature and audacity to alter his surroundings, through efficient forms of destruction. Paradoxically, mankind is willfully committing suicide in its attempt to become a godlike creator. This album is a soundtrack to the decimation of all that is known, “the age of none.”
A thirty-six minute onslaught of blasting and grooving barbarity, Omnicide was tracked and mixed by guitarist Marco Bobadilla at Crimson Recording and mastered by Alan Douches (Cannibal Corpse, Beneath the Massacre, Job For A Cowboy) at West West Side Music. GRIMUS will self-release Omnicide on June 25 2013. 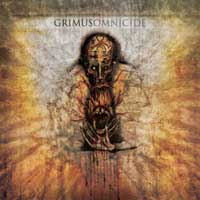 Tracklist:
01. Without Master
02. Decimation
03. I, Destroyer
04. The Hut of Extinction
05. The Vulture
06. I.V.A.N.
07. Draped in Fear
08. Cradled by Misfortune
09. Within Isolation
The Omnicide album art was illustrated and designed by bassist Michael Goncalves.

The Resistance - Clearing the Slate