Welcome to Extreminal Webzine. As a starter please present your band to those who still haven’t heard your name?
Hi there, here’s Pablo writing. GREY is a Hamburg based four piece Math-Hard-Whatever-Core Band consisting of Jakub (vocals), Jörg (guitar), Marco (bass) and myself (drums, additional vocals) which was founded in 2008. 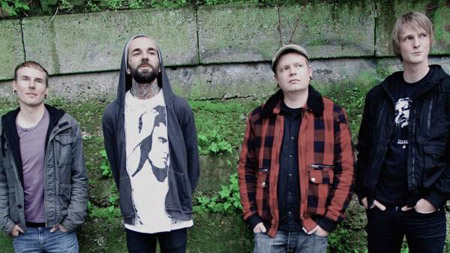 Your debut album “Whoneedsyou” is already out via Bastardized Records.Tell us some more words about it – are you happy with the final result, where did you record it and who is the producer,etc…
The drum tracks were recorded at the SU2-Studio by Phil Hillen. After finshing the drums we took the tracks to hamburg where I run my own studio, the Lynn Aloysound. There we tracked guitars, bass and vocals and after finishing the recordings Phil mixed and mastered the album.  We are very happy with the result, Phil did an amazing job. 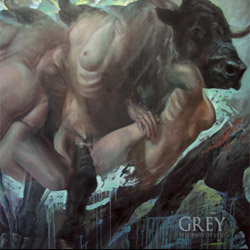 The cover artwork of “Whoneedsyou” is really interesting – tell us who made it and what’s the idea behind the drawing ?
It’s an oil-on-canvas-painting by an young polish artist, Jakub Kujawa. Our singer Jakub saw the painting in a tattoo studio in Poland and when we talked about our artwork it came back to his mind. We all love the painting and luckily Jakub Kujawa allowed us to use it for our debut.

What are your lyrics about? Where do you gain inspiration from to write them and who the hell is the “girl with the pornstar name” (the title of the fourth track of “Whoneedsyou” :)?
Unfortunetly I can’t tell you anything about our lyrics because I don’t know anything about them. The only one who could tell you something is Jakub and he won’t do. He wants the listeners to interpret the lyrics their own way. I know that some parts of the lyrics are fictional, others are based on true stories. That’s all I can tell you, and I definitely want to know who’s that girl, too!

How do you compose your compose your music? Is there a main composer in GREY or you all contribute to the writing process?
Typically Jörg comes up with an idea, or in fact he comes up with a whole song which only exists inside his head at this time. Then Jörg and I work on his ideas, create the drum patterns, change the arrengement, ect. Then Marco comes up with his bass parts and jakub with his lyrics and vocal arrengements. Thats pretty much it. 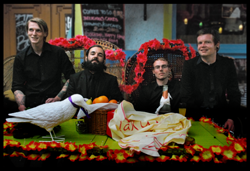 Why did you choose exactly GREY as a name for your band? Aren’t there many other bands with the same name ?
I don’t know how many bands are called GREY and to be honest I don’t want to know. GREY was part of an other suggestion which we didn’t use. Marco recommended to call the band GREY and many other terrible suggestions later we decided to use it. GREY is short, memmorable and can be interpreted in many directions.

What is the difference between the music of GREY and that of your previous hardcore bands?
I think the sound of GREY is a bit more complex compared to the other bands we played in but that wasn’t our intention. We just started writing songs and that’s the way they sound.

Do you play live often and how does a GREY concert look like?
We play live as often as possible, current we are playing a lot of weekend shows cause we have to work during the week. Unfortunatly I haven’t seen a GREY show, besides from videos. I hope that our shows are intense, at least that’s what we’re trying. 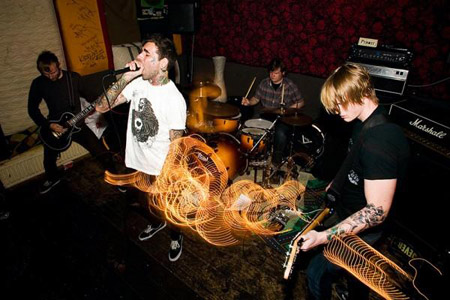 How is the hardcore scene in your native city Hamburg? Who are your favourite bands from this area that you would like to recommend?
The hardcore scene in Hamburg is pretty lively. There are a bunch of cool clubs and a bunch of cool bands here. Bands I’d definitly recommend are THE DESTINY PROGRAM, CALEYA, NEVER and BETTYOETKER. There are many other which I just can’t recollect right now. 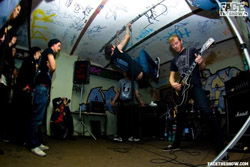 Who are the bands/musicians that influenced you to start playing music ?
I started listening to heavy music very early, my older brother listenend to many metal bands in the late 80’s / early 90’s, bands like SLAYER, METALLICA, MEGADETH ect. I think it was a combination of those bands which made me wanna be a musician myself, I can’t think of one particular artist who influenced me.

How do you think is mathcore accepted among the hardcore fans? Is there a big following for your style of extreme music?
I think there are small-minded purists in every music genre, it’s not a hardcore specific thing. But there are a lot of people who are looking for something new, exciting and maybe claiming.

Which one is the last album that you listened and made an impression on you?
„Holon : Hiberno“ by THE HIRSCH EFFEKT definetely impressed me. It’s a very multifaceted record, it combines hardcore, postcore, alternative, pop and many, many other styles of music but sounds completely homogeneous. They are a great live band too, everybody who reads this should check them out.

This is the end of the interview – any last words for our readers and fans perhaps ?
Thank you very much for taking the time! Check out ‘myspace.com/whoneedsyou‘ and come to our shows, cause that’s the reason we’re doing it!