Hails Gospel Of The Horns! First of all, can you tell me a bit about the earlier times of the band? How have you decided to create the band? What are your influences?
I have to say the early days were total chaos. Back when Gospel started it really was a new chapter in Metal, with the black meatal explosion. We were heavily influenced by Sodom, Bathory and Venom, and around this time the scene was over floaded with the generic death metal sound which was coming out of Florida.The one thing we aimed to unleash was unbridled aggression which typified the feelings we had plus a statement of what was needed in those times.. Blasphemy and doom. I think we have succeeded in this area both in our releases and live assaults. I think this sums up both Gospel and the Australian attitude perfectly Ha! 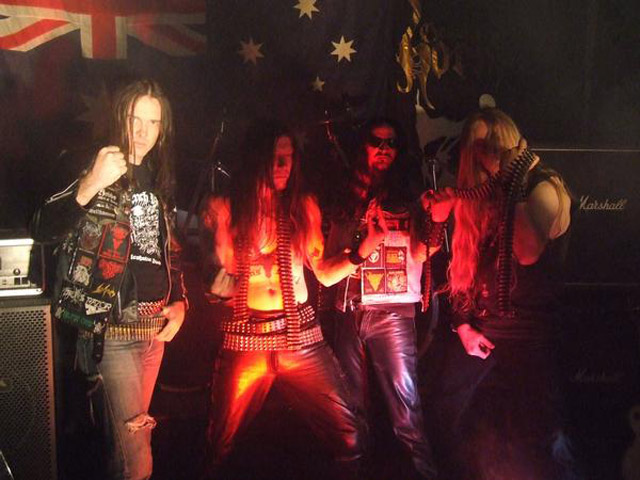 Currently,the members are Mark Howitzer on bass/vocals, Chris Masochist on lead guitar and Marcus H.K on drums. How long have you been playing together?
Actually Hellcunt is no longer with Gospel, we have Mersus (formally from D666) on the drums of death. Having said that Masochist and I have been ripping out this unholy fury for well over 14 years. Hellcunt was a major part of the band, the times we had together were great, not only with his drumming abilities but also his driving attitude towards taking on all comers.. He is now committed to Vomitor and with Mersus joining the ranks with Gospel we have never been more focused in delivering a energy dedicated to bringing down the veil of falsehood. 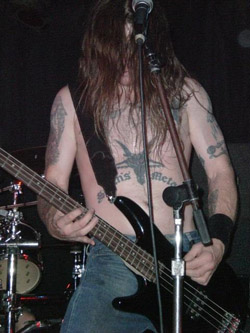 You’ve released your first demo The Satanist’s Dream by Einstand Records from Italy. After that,you’ve changed a couple of Labels. What was the reason?
Well after the complete cluster fuck of Einstand records (who pressed our demo on CD) we had got a few offers to release our next release. We decided with Damnation records from Holland. They were perfect for the band at this stage, infact the Eve of the conqueror MLP was as killer collaboration for both parties. We toured Europe in 2000 to support the release, which I have to say was pretty rare for an Aussie band back then. Yeah we done it tough, but all in all it was a killer expreriance.. It was after this we had some problems with Damnation. Gospel had recorded the tracks for "a call to arms" it was ready to be unleashed to the world, but Damnation couldnt come up with the funds to pay the studio..This was where Invictus productions came in… We first met Darragh on the Euro invasion in 2000, he was keen to step up to the plate, and as the saying goes, the rest is history.

Where are you currently located? How is it going with the band nowadays? Do you already have any plan for an upcoming release in 2013?
Gospel of the Horns now reside in Germany, and I must say the nucleus has never been stronger. Gospel will not disappoint on the full length. Every song will have its memorable moments without filling riffs or things like that. We seek total impact with very catchy parts that contribute in making this album a true classic in our metal armoury. I believe if a song translates live then it without doubt will come out in all its ferocity in the studio. Our new material is a charging line of attack that is unrelentingly unforgiving. ATTAAAAACK!!!!!! 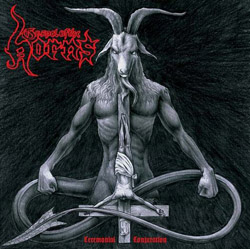 Who’s doing the artworks of the band?
The artist we used for Realm of the Damned and Ceremonial Conjuration was Simon Turner (Assaulter frontman) For the Boxset release and future stuff we shall be using John Fay from Cruachan. The infamous John Fay!

Which others bands are you following to?
Hmmm well I still cant get enough of Sodom and Maiden..But for new shit I really like Antichrist, Witching Metal, Rabies, Nocturnal Graves, Deathhammer.. Plus bands such as Coffins, Desaster, D666, gOATSNAKE, pORTAL, Vomitor, Ares Kingdom, Hobbs angel of Death, Funerary Pit, Iron Dogs and Witchhammer!!!

What do you think about the metal scene in Australia?
Certainly we have forged skull crushing brutal metal bands like Bestial Warlust, Sadistik Execution, Slaughter Lord etc and in many ways the Aussie scene back then really lead from the front with bands that played in this "war metal" vein.. I think the Australian scene (as well as Gospel) have been able to create our own sound and identity, and without sounding arrogant I think we have succeeded in this area both in releases and live assaults. I think this sums up the Australian attitude perfectly Ha!

Do you have any confirmed shows or tours in the near future? I know you’re going to have a Balkan tour with Endezzma from Norway. Is it going to be your first tour to Balkans?
Cancelled! haha 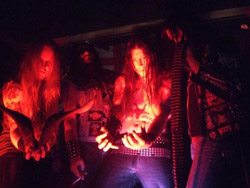 Deströyer 666 is playing in Istanbul on Feb. I’m looking forward to see you with Gospel Of The Horns as well! If you’ll have an offer,would you like to play in Turkey? Too bad you are not hitting to Istanbul in your Balkan tour with Gospel Of The Horns! You have a lot of fans here!
We hope to visit you maniacs and deliver the powers of darkness in 2013, take the oath pledge till death.. I know for a fact D666 will completely obliterate you guys.. not one step back, Unchain the wolves!!! I must say we are extremely pumped to visit you maniacs, its been to long in the making.. Die by POWER!!!

Can you give the link of your official online merch store for the extreminal followers? The hoodie is killer! Going to order it next month,if it won’t be out of stock haha!
Haha right Gospelofthehorns.com of course we shall be sending you a shirt and cds for this killer interview!

Thanks a lot for the interview! Keep destroying the posers!!
Cheers for supporting Gospel of the Horns. Hopefully we will meet many of you maniacs on tour, at the bar or anywhere else where chaos reigns supreme. We should be in the studio early 2013 to start work on the LP, You’ve been warned. ACTIVATE! DOMINATE! OBLITERATE! CRUSH!