Greetings and welcome to Extreminal Webzine! As a start,please present GORE OBSSESSED to our readers ?
Hi Extreminal Readers!
Gore Obsessed is a one-man "band" playing Death/Grind inspired by the early masters. The lyrics are mostly fun, friendly tales of Horror (inspired by horror movies and sick stories), Death and Necrophlia. Even though I use a drum machine I try and get it to sound as realistic as possiable. I also use very little Pitchshifted vokills, mostly the vokills are without effects (though I am making an "experimental" EP where all the songs will have Pitchshifted vokills, like Romperprop, CBT and Regurgitate. This is more for fun as I like those bands vocal style but for now will only be done on the one EP).

You have a split CD with the Turkish band BRUTALCORE out. Tell us a few words about this release?
It was an honor to share a split with Brutalcore, I like their music a lot and they’re cool guys. I recorded 7 tracks for the split which turned out raw and grinding. The lyrics where inspired by Horror movies and gore stories as usual haha. Both bands recorded a Mortician cover track for the split. I did a cover of ‘Slaughterhouse’ as I’m both a big fan of the song and the movie. I also did the booklet layout for the split (using the ‘Slaughterhouse’ poster art as a base and making it look a bit more like a grindhouse poster). I’d like to say a BIG Thank you to my friend Anil for setting up the split and Extreminal for releasing it!

GORE OBSSESSED is a one-man project. Have you ever been in a band with other people and why did you decide to do everything in GORE OBSSESSED by yourself? Is it easier that way?
I tried previous bands with more members but in the end they never worked out. I have an idea of the music I want to record and I like to have full control of it. Being a one man band presents a few problems but there are a lot of positive things; I can record when I want, take the music in the direction I want and if it turns out bad I can only blame myself. I might be taking the one-man thing a bit to far as I also do all the production, mixing, mastering and artwork (mostly messing with horror posters in photoshop) myself haha. 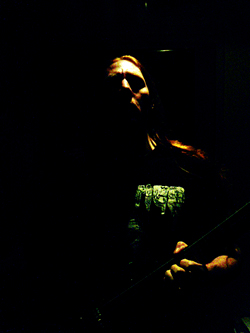 Where do you record your material – at a home studio or somewhere else ?
I record all the material at my home "studio". I don’t think it really qualifies as a studio (all the equipment I use, besides my guitar, is cheap shit) but it works and allows me to record when I want and how I want.

Your discography consists of EP’s and split records. Do you plan to release a full-length album ?
I constantly record small sessions or 4-8 tracks and like to release them as a 7-10 minute EP/Split rather than wait till I have 30 minutes worth, so for now I’ll continue releasing a few more EP’s and Splits. I’d like to release a full-lenght in the future (the first full-lenght will probably be a collection of my favorite tracks from my various EPs/Splits, re-mixed with better sound). I’m a fan of bands like Agathocles, Unholy Grave and Nunslaughter’s huge discographies of splits and EP’s (now if only I had their talent haha).

Is there any label interested in releasing your music ?
At the moment the interest comes from small D.I.Y labels, which I find perfect. I’ll be releasing a split CD through ‘Rotten Flesh Eating’ Records. I was also talking to ‘No Future Productions’ about a possible cassette tape release.
I’ll continue to releasing most of my music as free downloads through ‘Torn Flesh Records’ (who do an awesome job) and my own Net-label ‘Dis-Organ-Ized Netlabel’ 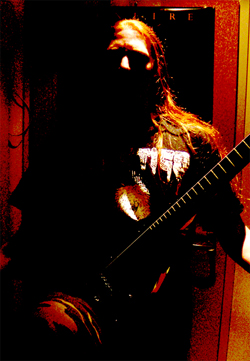 Who are the bands that have inspired you to start playing death metal ?
My all time favourite, IMPETIGO! to me that was the perfect band and my main inspiration. Other bands that inspire me are Haemorrahge, NunSlaughter, Extreme Noise Terror, Jungle Rot, Agathocles and Cripple Bastards. And of course the classics Death, Obituary, Napalm Death, Gut and Brutal Truth.

Your lyrics are inspired by horror movies.Which are your favourite horror movies and why ?
Some of my favourites are:
Fulci’s Zombi 2 (Flesh Eating Zombies) : This movie has some of the coolest zombies ever (especially the zombie on the cover with the eye-socket full of maggots). Also what’s cooler than a zombie fighting a shark haha. I recently met the actor who played the maggot eye zombie as well as a few of the other cast members at a Horror convention.

Cannibal Holocaust : I’m a BIG fan of Italian Jungle Cannibal films and this is the greatest of all Cannibal films!
Forget all the modern crap like SAW and HOSTEL this movie is truly disturbing!

Texas Chainsaw Massacre : The Original! To me this is another horror classic and Leatherface is the coolest of all the "masked killers".
The first kill scene with Leatherface is simple but brilliant.

Maniac : I love this movie,it’s grisly and nasty! Frank Zito is a great, creepy as fuck character and Of course, Savini’s gore scenes are excellent.
A must see for all Horror fans.

Dawn of the Dead : The Original! I’m not a big fan of remakes and I HATE fast zombies haha. Just like Fulci’s Zombie this is a classic!
This was the first Zombie film I can remember seeing and has a special place in my putrid heart. 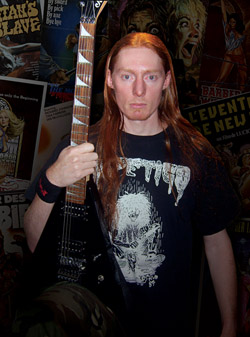 The New York Ripper – How can you not love this film…Gore…Gore and more Gore, a Killer with a silly duck voice and mutilated hand, Broken bottle shoved in a woman’s vagina. What’s not to love.

The Beyond, House by the Cemetery, City of the Living Dead, Don’t Torture a Duckling, A Lizard in a Woman’s Skin – I love Fulci’s films haha…Fulci LIVES!

Not forgetting Suspiria, Deep Red, Opera and other Argento classics!

Your final words to the readers of Extreminal ?
Thanks to Extreminal for the interview! and a BIG Thank you to all the readers for your support!
If you haven’t heard Gore Obsessed, take a listen and let me know what you think (you can download most of my recordings free from the GxOx myspace page). Support the underground and GRIND ON!