Greek death metallers GOD.FEAR.NONE will release their new album, “OverBlack Clouds”, later in the year. The CD contains 11 new songs oftechnical and melodic death metal, plus three re-recordings of songstaken from the “Vultures” album, which was released in 2007 (availableonly through iTunes and Uppercut Music). 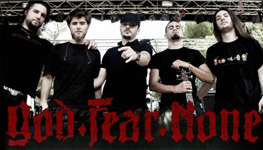 – Becoming Nothing
– Ghost Of AChance
– Half A Man
– War Lost
– TheDevour