Dutch death metal band God Dethroned revealed the tracklist of their ninth album ‘Uder The Sign Of The Iron Cross’, recorded at Soundlodge Studios in Germany. The album will be released on November 23th via Metal Blade… 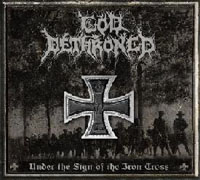 Tracklist:
01. The Declaration of War
02. Storm of Steel
03. Fire Storm
04. The Killing is Faceless
05. Under the Sign of the Iron Cross
06. Chaos Reigns at Dawn
07. Through Byzantine Hemispheres
08. The Red Baron
09. On Fields of Death & Desolation