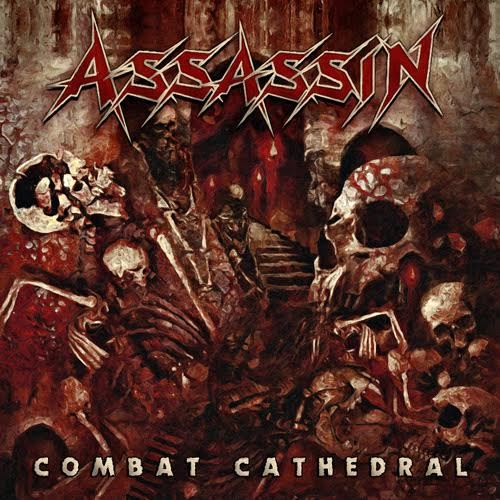 German thrash metal pioneers ASSASSIN will release their new studio album, “Combat Cathedral”, on May 20. The effort will be made available via Steamhammer/SPV worldwide on CD, limited-edition LP (500 copies only on red 180-gram vinyl + CD) and as a digital download. The cover art was created by Marcelo Vasco, who also worked with SLAYER, MACHINE HEAD, SOULFLY and BORKNAGAR.
After founding member and vocalist Robert Gonella left ASSASSIN in 2014, new singer Ingo “Crowzak” Bajonczak joined the group and it turned out that he was the right choice for the band. From the first to the last note, the album contains loads of energy and ultra-heavy riffing, making it clear that ASSASSIN is still at the top of the list of German thrash metal bands.
Comments ASSASSIN guitarist Jürgen “Scholli” Scholz: “Like back in the ’80s, the new album stands for thrash metal at its finest, but after the last album, ‘Breaking The Silence’, much more mature, developed and with a very fat production. Songs with 220- 240 bpm are not rare, same with groovy mosh parts, which are partially nested into each other and a lot of sticking refrains, which will animate you, to shout them along immediately together with our new singer Crowzak. The opener sums it up perfectly: ASSASSIN are ‘back from the dead!'”
Source:Blabbermouth