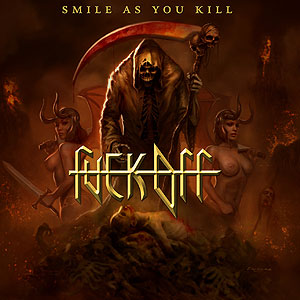 Spanish most legendary and pioneer Thrash Metal band FUCK OFF is about to unleash their long awaited comeback album!! Just one year after their 1988 debut album “Another Sacrifice” was re-issued, the band, reformed in 2010, will see their 3rd full length “Smile As You Kill” released in September through Xtreem Music.
The new album follows the traditional style of the band, an old fashioned Speed/ Thrash/ Heavy Metal totally exempt from modern influences and clichés, being recorded the 80’s way with analogic systems, but counting with the mastering of swedish gurú Dan Swanö who gave all the songs the heavy and powerful feeling it needed.
Tracklist of “Smile As You Kill” is as follows:
1. Azor
2. Doomed From the Cradle
3. Gardens of Stone
4. Smile As You Kill
5. The Priest
6. We Are Back in Town
7. Impera la Corrupción
8. People in War [2013]
9. Long Live Rock & Roll [Rainbow]