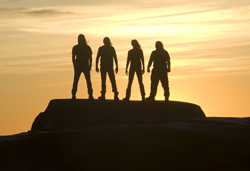 Since you guys are Norwegian, I’m not surprised to hear lots of black metal in your new album. But tell me, why did you name it “Landgang”?
‘Landgang’ as in ‘landing,’ is the expression used when a boat lands on shore. This fit nicely into our concept for the album. The cover art and lyrics throughout the album works out well with the title, making the album a story. So Landgang is basically about plundering, pillaging, and taking back the thrones from the Christian overlords raping our lands. Those bastards had it coming! Hehehehe!

By the way, I’m Miguel. The Heavy Metal Scribe. Please introduce the warm bodies in the band to our readers.
Hi Miguel! To introduce Framferd, lets start with Nødset, one of our original members and the drummer. Langbach, the second original member of the band, is on bass and vocals. Rystad is our fresh blooded guitarist and Kvist the long time guitarist of the band.

So how long has the bromance been burning between the four of you? What I mean to ask i s, before Framferd came to be, who met whom?
Nødset and I are friends from childhood; starting fires in the forest and causing general chaos in the neighborhood. Though band-wise we never played together, we started Framferd together in 2002. Rystad is Nødset`s brother in law, and when Kittelsen quit the band in 2009 Rystad was a natural replacement. We plundered Kvist from another band around 2005.

Oh yeah, what’s a Framferd?
Framferd is also a Norwegian word meaning ‘when you sense something is about to happen,’ but it could also mean ‘raid’ or simply just ‘behavior.’ 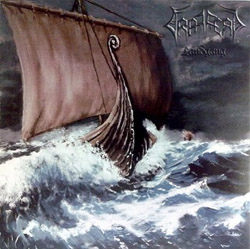 Alright, let’s get down to business. “Landgang” came out November last year. How would you compare its reception from fans and press to your first album?
The biggest difference with “Landgang” is that we are now a signed band. This has made it easier for us to get serious reviews and not being a demo-band. The reception of “Landgang” at least in Norway has been great so far. Although we appreciate constructive criticism, and reflect upon it, the overall feedback has been great. With [our previous album] “Djevelskap,” we felt we were not taken seriously, and although the feedback on “Djevelskap” was good, we never felt we were taken 100% seriously. And that has been a great difference with “Landgang.” Though Some critics do not like it at all, we were brutally slaughtered by some German site, but Framferd can`t be everyone`s cup of tea.

Going into the details now, where did the four of you go to record the album? Did you have to improvise in the studio for any of the songs or was all the new material covered during preproduction?
Framferd was very well prepared for the recording of “Landgang.” All click-tracks were finished and everything was covered during preproduction. Of course, there are some small things changes and new ideas that occur in the studio, and the entire last track “Arv” was created during the studio sessions.

Since “Landgang” isn’t your first foray in recording, do you find yourselves a lot more comfortable in the studio environment these days?
Framferd is a cursed studio band. Technical issues, problems and sickness is always a part of the Framferd studio session. We are comfortable in the studio and we all love it, but all the problems and issues are a major frustration, and we hope next time will be better! Next time we will get more help with the pre-production from our label, and we are most likely going to use the label’s studio for the next album.

When an album is in the works, do the four of you stick your head’s together or is there just one asshole in the band giving orders? And who bothered making sure the cover art was fuckin’ epic?
When it comes to the creativity in the band, we are a good team and a good democracy. We usually work out the ideas together, thus making it better than the original idea the one asshole had. Hahaha!
The cover art for “Landgang” was painted by Kvist’s father, Arve Engrønningen. Kvist and Langbach worked with Arve to get the result we wanted and I put it all together when the paintings were done. We are really happy with the epic results!

Now that “Landgang” has been out in the market for five months, do you ever listen to it and notice things you’d like to change?
Some of the ideas on “Landgang” did not come out as we wanted. And now that some time has passed, we all find things we would like to change. The mastering lifted the whole thing a lot, but the original production is not as good as we wanted it to be. But again that comes from the low budget, and for the next album we have plans to improve this. That the album sounds a bit ‘stripped’ and ‘honest’ is something we wanted, and we are happy that the album sounds so organic. We are happy with how the album turned out, but we would like the production to be a bit better. 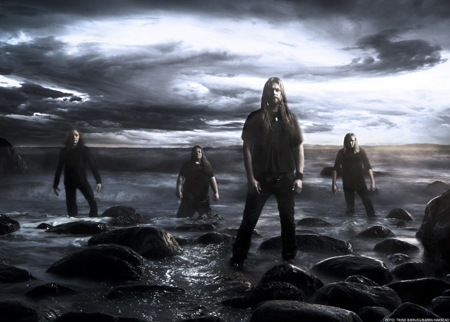 With the band standing tall under the banner of Viking Metal, which song’s on “Landgang” are the Viking-est? Are you already making plans for album number three?
Viking-est on the album has to be Landgang, Arv, Eternal and Elite. These are songs we are really proud of. Those songs are great to listen to, they have everything a song should have. Currently we are working on new material for album number three, and so far we feel we are evolving what was good on “Landgang” even further.

How far has Framferd pillaged and burned? I’m asking about gigs, mind you. Have you ever laid waste to stages outside Norway?
Sadly we have not yet played outside Norway, but we are currently working on a longer European tour with some other Norwegian bands and hope to invade some foreign stages as fast as possible! 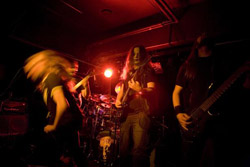 Tell the world to say ‘hello’ to your gear. If we checked, what ‘weapons’ will we find in Framferd’s arsenal?
Our weapons of choice are Premier Artist in maple wood and Sabian cymbals; Engl Powerball guitar amps; Gibson and Warrick guitars; Ampeg b-series bass amp; Yamaha and Ibanez 5-string basses; and Apple Pro Logic for pre-production.

Around the time you were still growing chest hair, what was your biggest motivation to pick up an instrument and rock hard?
Nødset’s biggest inspiration to start whipping the skins was Death (RIP). Rystad has always been a die hard Metallica fan. For me it was Sepultura and Manowar. Kvist just wanted to play fuckin’ metal. So when everyone else was out playing football we practiced our instruments.

What usually goes down when Framferd are practicing? When a member of the band arrives late, does he get spanked?
We try to be as efficient as possible when practicing. Up till now we still have not had the need to spank anyone for being late, but who knows, hehehe…We try to be understanding if someone is late.

Tell me about your little corner of the world. What’s your hometown like?
We come from Tønsberg, Norway. Tønsberg is the oldest town in Norway, and according to Snorri Sturlason it was founded in 871. Tønsberg is full of Viking monuments, treasures, ships, grave mounds and history. The center of town is still old ruins from the time of our forefathers. It’s a small town of about 30,000 inhabitants, lots of Viking markets, medieval gatherings, and is also a popular tourist spot in Norway due to its extensive history. Winter is cold as fucking ragnarok.

You’re from Norway for fuck’s sake. There must be concerts near you every fuckin’ day of the week. You catch any good concerts lately? Tell us all about it.
Wednesday to Sunday are usually concert days in almost every corner of Norway. There’s lots of black metal. Inferno Festivals in Oslo is coming up, and there are lots of good bands [this year]! Looking forward especially to seeing Necrophagist live! Enslaved played in Tønsberg last summer which was great! One thing that’s really weird: If you go to Germany you find a load of Norwegian bands that you never have heard of in Norway, and they’re still pretty big over seas. Comes to show how small Norway is. 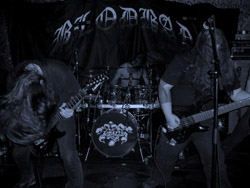 We’re three months into 2010. Are there any new albums that you’re totally digging? For me, it’s a tie between the new Overkill and Fear Factory.
One of the best albums of 2010 has already been released and it’s Carach Angren’s latest. The Meshuggah DVD was a masterpiece. Shining’s “Blackjazz” is awesome too. Unleashed just released their new masterpiece. And we agree with Fear Factory; it’s good that Gene Hoglan is the new member!

That bush growing on your face: Do you prefer calling it a beard or a mangina?
That is absolutely a Vikingmangina!

Aside from groping a long haired guy who you thought was a chick when you were drunk once, what are the other cool things you’ve done while shitfaced?
Oh man! Hahaha…That’s fucked up, man! We have done much cool stuff, but I guess that’s a question you should ask face to face.Then we can see your face change when we tell it. Hehehe…

Alright Framferd, we’ve reached the end here. Time to call it a day. Does the band have any shows on the horizon? I mean, gigs for next week and all that Jazz.
We are making plans for this summer, but no confirmed dates yet. Hopefully we are going to do a few dates in Germany and some festivals around Norway.