We’d done a reporting with the band “Faust” which established on 1992; silence in 1993 after their demo, after an EP they out their first album on 2009… 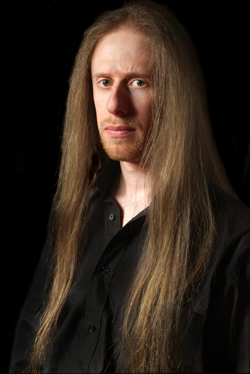 Hi Aleister, we want to start with a sub-information about your band as you are the establisher of your band, what about the situation on 1992 (establishing of band) in Italy and on you?
Aleister: Hi Goremented! FAUST was born in 1992. During this time, many line-up’s changes, several concerts and three releases: "FAUST" demo of 1993, "… And Finally FAUST!" mcd of 2001 and “From Glory To Infinity” full length of 2009. The current line-up is: Aleister – guitar / vocals, Ghiulz – guitar, Steve DiGiorgio – bass. These are the latest news: the new album “From Glory To Infinity” was released by STYGIAN CRYPT productions (Russia) exclusively in EU and by PARAGON RECORDS (USA) exclusively in USA on 9/9/9. It was also released in DIGIPACK format by ABYSS RECORDS (USA) on October the 31st 2009. Soon the PICTURE DISC format will be released by NEGATIVITY RECORDS (USA), limited edition of 666 copies with an exclusive artwork.

I’m listening your album now, I mentioned that, your album is very good in my review, how about the demo album “Faust” on 1993, how was the reactions from audience? You were more young than today, certainly many things were changed situationally…
Thanks for your compliments! The demo “FAUST” contains five songs of Death Metal; it received pretty good reviews in Italy. Basically our sound hasn’t changed since 1992; but, over the years, it has improved: the technical skills, the complexity of the songs’ structure and the refinement of the arrangements. This thanks also to the new arrivals Ghiulz and Steve!

It granted that in your biography but I want to ask it for our readers, after the demo, the band didn’t published any record until 2001, what kind of problems you lasted?
The main problem was to find good musicians to work with: I’d never had a continuity of work because every time I changed the line-up, I had to restart everything from zero. 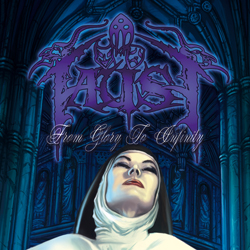 It’s a long time 2001 to 2009, what is the problem of delay, is it about sparing time to the other projects?
No, it isn’t! As I said before, it was the lack of good musicians.

You produced a TV Show “Extreme Metal”, can you mention about that, is it still continue?
Unfortunately not. I had been the author and the host of “Extreme Metal” from July 2005 to October 2006. This has been the first and the only one TV show about extreme Metal ever made in Italy. Every month I invited in studio an Italian underground band with an own video clip. My goals were to explain what extreme Metal was to all those people that didn’t know it and to give a bit of visibility to underground bands. The audience could interact with us by sms. I received so many sms that I didn’t have the time to read them all. After the episode of September 2006, the show was shut down and me dismissed from the TV channel. Official reason (by the TV channel): “A musician that made a guest appearance on "Extreme Metal", professed his belief in Satanism.” – NOT TRUE. The real reason: the owner of this TV channel didn’t like Metal, the Metal scene and metalheads. 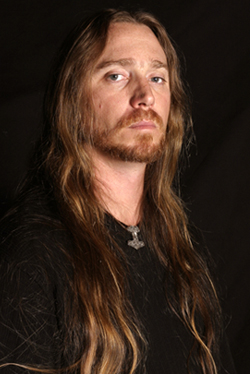 Steve DiGiorgio is named as “Session member” in some sources, what is the recent condition of Steve in your band?
He isn’t a session. After the recordings of the new album "From Glory To Infinity", he became part of FAUST, giving his availability for future recordings and lives.

Daray and Luca served for album, do you think any famous names for your about stage-on performances ?
I prefer to take care of someone’s musical style and see if it combines with FAUST. It’s not important if a musician is famous or not.

The album “From Glory to Infinity” was prepared for records in 2006, what kind of thing changes after that time, these compositions were out with that condition? Or?
In 2006 I engaged Darek ‘Daray’ Brzozowski (Dimmu Borgir, Vader, Vesania) because FAUST didn’t have a good drummer for the recordings and Luca Princiotta (Doro, Blaze Bayley) to record the second rhythm and acoustic guitars because Ghiulz couldn’t, being too busy with his job in that period. Then I contacted Steve considering him the right bassist for our music. The album was mixed and mastered at the Trident Studios, California. Finally it took me some months before to sign the contracts with the FAUST’s four labels.

I think that “From Glory to Infinity” album is the turning point for Faust, and many music authors think like me. I’m sure, the next album will give the same pleasure, I think you started to prepare new things, do you have new plans with spesific dates?
We are already working on new material; personally I started the day after my last recording session. No dates at the moment; but, for sure, you won’t have to wait for other 8 years, this time.

I expect that, you are a superbness person about music, I can see from compositions and selections of members on your band, is this situation same on your the other bands?
Thanks for your consideration! Ghiulz and Steve are all professional musicians. We are really open minded about music: this influences our approach to the composing process, giving to our sound more richness and variety. 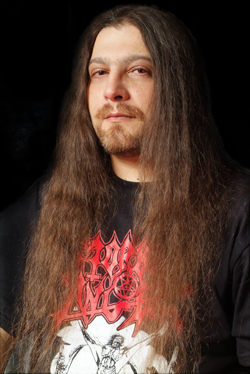 When we look at to album cover “From Glory to Infinity” it looks like oldschool death metal bands’ album covers, I think your music is more modern than that, what makes this cover special?
You got the fine concept behind FAUST: I like to call our music Evolutionary Death Metal, because it’s Technical Death Metal of this third millennium; but we are strictly connected to the early nineties. The cover of the new album “From Glory To Infinity” is an homage to the best years in the history of Death Metal.

In recent days, I can access many bands from Italy, generally these bands are thrash metal bands, from your perspection, how is the Italy music market?
Bad.

My questions are all of that, do you want to add something?
Thank you for the interview! Everyone can always contact FAUST or me at: www.deathmetal.it (FAUST’s official website), www.myspace.com/faustband2 (FAUST’s page), www.myspace.com/aleisterpgd (my personal page). Hail to all readers! Hope to see you soon at the FAUST’s upcoming shows!