Hi! What`s up? You`re promoting the new Fathomhell`s EP entitled "Kvrx". What about the response from the fans?
Greetings Kwiecio! Here Ludwigar, playing the new Kriegsmaschine album while I’m answering this interview. Well, I’m not particularly promoting so much ‘’KvrX’’ as I did before with our debut ‘’Non Pietatem Erit’’, and the label is promoting it still less than me, but I can say that I’m having much more and better feedback than our debut. Really I haven’t seen any bad word about ‘’KvrX’’, all are good impressions. 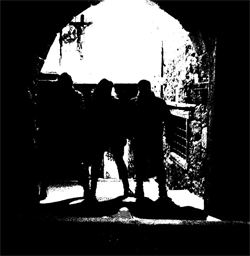 You’re signed to Cold Raw Records. How did you end up with them?
I was looking for an underground label that release quickly and easly the EP because I didn’t want to wait a long time to release this EP, because ‘’KvrX’’ was planned for early 2013 but was delayed because the passivity of one of our former members. Therefore we finished to record it early 2014. In fact, we were about to sign with a semi-professional label but maybe ‘’KvrX’’ wouldn’t be released at this time yet.

Your band started as a solo project. What was the impulse to begin making music and what about the differences (from your view) between making stuff solo and with the other members nowadays?
Really it was the opposite, I founded the band early 2010 along with two members: Al-Wars (vocals, rhythm guitar and lyrics) and Necroghoul (bass). In fact, this line-up was with that we record our debut ‘’Non Pietatem Erit’’ and we played some gigs. After release this EP, Al-Wars left the band late 2012 and Necroghoul was relegated late 2013, keeping the band like a solo project. Now I have beside me to Edvart Førevinter and he became as member session to record the bass in ‘’KvrX’’ and considering him from this release like an official member of Fathomhell, also if I need it, he can help me in many ways because he is a better musician than me. As for making music isn’t much difference because I composed the 100% of the music before but I focused the rhythm guitar in a different way in order to help and facilitate to Al-Wars when we played gigs because he played both vocals and guitar. Now I keep being the only songwriter but I have no need to focus the music for gigs, so that the rhythm guitars have substantially improved and therefore, the music has improved in harmony.

Compared to your debut EP where do you think the biggest difference in the music is nowadays?
There is a clear improvement on the music composition, more coherence and cohesion, and it looms the first evolution on Fathomhell’s music. Although I still place the new EP with the old stuff because ‘’Non Pieatem Erit’’ is written between 2010 and 2011, and ‘’KvrX’’ in 2012. So that it’s still keeping the essence of the Swedish Black Metal and the Scandinavian Metal in general. Also includes some other influences and a more personal and ‘’original’’ touch. The difference is also on vocals, ‘’Non Pietatem Erit’’ were recorded by Al-Wars, and ‘’KvrX’’ by me.

Your releases are strictly limited. What about the best sides of this way of relesing your stuff?
I think the very limited editions stand for the underground spirit, namely, I also don’t think selling editions of 500 or 1000 copies are mainstream. But with 66 limited copies as in the case of ‘’Kvrx’’, you limit the sale, and the release will be bought by who really are interested to be one of the few people to have that edition. I think that’s the true spirit. On the other hand, I don’t think that ‘’KvrX’’ edition needs to sell many more copies, when in these days everything can be downloaded on Internet. We are Fathomhell from Spain, not Immortal from Norway (for example). But if someone wants to release a run of 500 copies on vinyl of ‘’KvrX’’, he’s welcome haha 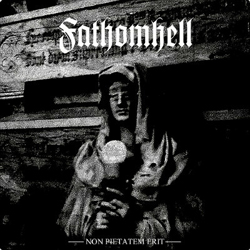 What about the weight of lyrics for Fathomhell? What is the main message from your lyrics?
Misanthropy, that’s the main message of Fathomhell. Dissatisfaction with the established system, political correctness, double standards, the modern world and the global alienation. In particular, the lyrics of ‘’KvrX’’, written by me, are a double metaphor (Serpent I & II) from two points of view: animadversion towards the mankind and the individual human including myself, reciprocally infected and rotting ourselves bit by bit in this world of shit. Broadly speaking, several interpretations can be drawn, more or less superficial, but actually lyrics have much more background.

Could you explain the genesis of the title of your new EP?
It’s a kind of wordplay, I prefer not to explain it, each one can search the meaning. But I can say that it represents the virus that the humanity is infected, in general, all I have explained above.

It seems that Mayhem is the important band for you. I can find the elements similar to norwegian legend. Is this correct and if yes could you explain why that is? Could you tell about your favourite bands, but not from mainstream? I would like to get know about the valuable new and unpopular bands interesting from your view.
You are right, Mayhem is one of the most influential bands of my songwriting and specially ‘’De Mysteriis Dom Sathanas’’ because I always considered this album as the best Black Metal album ever, just perfect. Although my music doesn’t reflect it much, my favourite Black Metal style have always been the Black Metal of the Norwegian scene (except Mayem how we talk before), just its purely atmosphere and nordic feelings are what I most adore of the Black Metal. In general, about the Scandinavian Black Metal and general Black Metal I like all the bands that everybody knows (or should know) but within all music I listen, my two all-time favourite bands are Enslaved and Darkthrone (absolutely all periods of both bands). If we talk about underground scene, from the Scandinavian scene I love and I would like to recommend to Norwegians Vemod, Mare and Stridsmenn (they keep the true Norwegian spirit!) and from Sweden, Stilla, a singular magic band with an awesome old Nordic essence. From other scenes, Monarque (Canadá), pure feeling. Negative Plane (USA), one of the most amazing bands out there, for Old School maniacs. From Germany, Imperium Dekadenz, great atmosphere, and Drengskapur, an example of how to make true Pagan Black Metal. One of the bands that are most talk lately, Bölzer (Switzerland), their ‘’Aura’’ EP is the most awesome, original and brutal that it has been done in many years. You can’t die without seeing this band live, an astral psychedelic experience. Slidhr (Irlanda), insane and dark. Mourning Forest (France), pure necro-melancholy. About Polish and Spanish (Black Metal) scene I reserve for the next questions. Also, me and Edvart Førevinter are True Heavy & Speed Metal maniacs, besides we have with other friends a club called ‘’Litrona de Acero’’ (‘Litrona’ is a Spanish expression’ for a beer bottle of one liter’ and ‘acero’ means ‘steel’), and we organize gigs and most of the bands we bring are of that vein. So I can’t forget of the best Heavy Metal band nowadays and my favourite heavy band: Enforcer from Sweden, just a crazy band. Also from Sweden I like In Solitude, Witchgrave, RAM. From Canada, Skull Fist, Iron Dogs. More bands: Black Magic (Norway), Eliminator (UK)… and from USA, another of my favourite bands, High Spirits, fucking great rocking’ feeling. From Spanish scene (not Black Metal), high quality Speed/Metal in your face. Witchtower, best NWOBHM band without being a British band. Steel Horse, best Heavy Metal from Spain. Retrofaith, evil and dark Thrash Metal. Oniricous, from our region and where Edvart Førevinter played the live guitar, great Old School Lovecraftian Death Metal. I left many more bands that are worth mentioning but I won’t dwell much or I don’t remember right now.

What could you tell about the black metal scene in Spain?
I think there is a very healthy Black Metal scene, with many band of medium-high level and a bands handful of very high level. On average, it can’t compare to other scenes such as Polish one but I think it’s a scene that is currently at the level of other countries that have traditionally exported a lot of Black Metal bands. But in Spain, there aren’t many tools nor support to Black Metal, and it is hard to export our bands outside our borders (maybe because we are a Southern country, I don’t know). Teitanblood is the band most known and exported in our scene Black (Death) Metal (even the logo is on the cover from ‘’Circle the Wagons’’ of Darkthrone). Primigenium also have a very good reputation outside Spain. These bands along with Andhord, Balmog y Aversio Humanitatis, are in my opinion the best we have, in other countries with more support for this genre, they would be among the top bands. 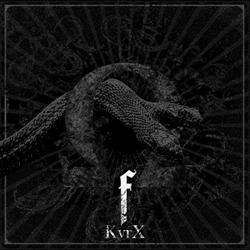 I saw you like polish band Plaga. I think it`s one of the best releases of 2013 too. What`s make them very special band for you? Do you know the other polish black metal bands like Mgla, Furia etc.?
Just I love them. For me, their debut full-lenght ”Magia Gwiezdnej Entropii” is one of the best albums that it has been released in the last years. Plaga has the true feeling to be transmitted in the Black Metal music. Those evil and beautiful melodies/harmonies/atmospheres are crazy. Mgła, what can I say about them? My favourite Black Metal band from nowadays and for me one of best bands of Black Metal history. They are legendary. About other bands that I know and I like from Polish scene (one of best scenes nowadays), bands such as Furia, Medico Peste, Blaze of Perdition, etc. And the other project of M., Kriegsmaschine, the last album ‘’Enemy of Man’’ is my favourite one of 2014 (along with ”Ensamhetens Andar” of Stilla).

Plaga is a very melodic band, Fathomhell has a lot of melodies too. What do you think why the early black metal bands wasn`t using this element too much in the past?
Well, it’s not important if there are melodies or not. That’s in the style of each band to play. Most important is always the feeling, personality, good taste and the atmosphere that it’s transmitted. And that is can do just with riffs of power chords and/or others chords (Gorgoroth), with tremolo picking melodies (Dissection), playing with the harmonies (Sargeist) and even through the dissonant riffs (last Kriegsmaschine album). But I don’t agree with those copy bands of early Darkthrone or Burzum (for example). People that doesn’t know how to play a power chords, and hides the mediocrity with ‘’raw’’, ‘’serious’’ and ‘’evil’’ bands, but really with bad and trite riffs. Darkthrone have hardly been a melodic band, but they knew to do with good taste, classy and originality, no like other bands. 12. Thanx for your time dude. Anything you’d like to add to conclude this interview?
Thanks you very much, Kwiecio, for this entertaining interview and your support to our band. Just say that we will release a ‘’KvrX’’ tape edition that is planned for 2015. Besides, we are working in new stuff that we hope to release it before the full length, almost completed. It will mean an evolution in our music, marking off thus a new phase of the band, it will surprise more than one! Listen our music on Bandcamp: fathomhell.bandcamp.com  And follow us on Facebook to find out the latest news from the band: www.facebook.com/fathomhell Obey to Fenriz!