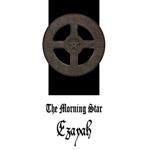 You can listen 2 songs from EZAYAH’s latest  album The Morning Star from myspace page : www.myspace.com/ezayah

The Album will be released with a limited copies and you’ll be able to buy the album from www.ezayah.com and www.myspace.com/ezayah

The album contains 7 new Ezayah songs. In this project Ezayah also has a guest musician on Melih Pekinbaş  playing  keyboards from GARGOYLE for 2 tracks on this project.