We had a little chat with the frontman of Ezayah, the band who jumped athmospheric black metal adventure alone in Istanbul/Turkey about the band and band’s past.

Hi Emrah. You weren’t active in the scene for a long time, I won’t get deep on that issue for that I know you personally. Why did Ezayah become stagnant(About making albums) for all this time?
First of all, I thank Extreminal crew for this interview. You are right about that. Looking at the discpgraphy, there is a gap of 3-4 years between the albums. Of course this wasn’t meant to be like that. Composing a song depends on having and making buildup and having the right conditions. I’ve never made something just to make it. And I see that my songs’ lifetime is long and they are still listened to( I mean my old songs), I feel that I am right.

Your fans think that the album was too late. What are the reactions so far? There aren’t much difference between “The Morning Star” album and demos you’ve released in 2002 and 2005. You like keeping your style same. How do you describe yourself for new listeners? What kind of project Ezayah is?
Yeah, I have to thank to all my fans, they never stopped contacting me and asking about a new album even there’s a long gap like this. This heartened me. And yes, I have a definite style and I’m thinking of keeping it in the line. I try to use same instruments but there are some flute and keyboard tones that I never used in The Morning Star. In my opinion I can say that this is better in quality and composition. I thank Hakan Özkan, my tone maister friend who never stopped standing for me.
About my description of Ezayah, it’s a project that opens the doors of perception. 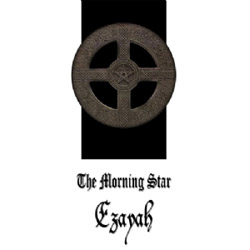 Can you talk about production phase of the album? I guess some musician friends gave some support on this, can you make this clear?
All Ezayah listeners know that I have 1-2 dark ambient work in every album, I feel these works are successful but I wanted to force the limits a little more and make more orchestral things. I had the compositions in my mind, but it was a wise move having my expert keyboard player friend Melih( Gargoyle,Reborn ). We composed these 2 songs togeter and I feel confident about these songs.

What do you think about split albums? Would you be eager to make a split if an offer exists from abroad or homeland?
Yes, we have a project on the agenda, it will be sensational if it happens. We will announce the details soon.

This album has something that the other ones didn’t have, Turkish lyrics. Using Turkish lyrics in this music and doing this right way is sometimes very hard but I think it’s good with your style. I feel like there are some secret meanings in this album. May I have some comments about that?
Of course. I feel something will be missing if I don’t talk about all the songs specially:
The Morning Star: As you can guess from the song title, song is about the morning star, Venus. The interesting part of Venus is that: Venus-Sun transition happens once in 584 days. And Venus comes a very same spot once in 8 years. 8 years equal 2920 days. If 2920 is divided by 5, we have 584. So Venus goes back 5 times in 8 years and has a transition with the sun. If we connect this 5 spots in a circle, we have a star (Pentagram) figure. This information was interesting for me and this inspired me and there we have The Morning Star.
Ay Çocuğu (Moon Child): I made the main melody in a night, there was the full moon. After that I had a dream, I saw that I’d have a baby boy. Then I learnt my wife had been pregnant and Kemal was born 🙂
Hep Siyah (Black Always): This song’s title was meant to be the album title but I changed my mind. Taking a look at the song, it talks about my inner world’s journey into the darkness with the nature aside.
Within the dimensions i travel: This song is going to be an Ezayah classic but you won’t notice unless you listen from start to the end. Because song has a journey itself. You can see this in the song’s title, ‘In the dimensions that I travel’, that’s what this song is about.
Raise Your Hands Through Darkness:About this song, I feel in this song, vocals are in the background (to me), I feel if people listen to it, they will have or find their own stories in this song.
I won’t tell about the other songs for now… 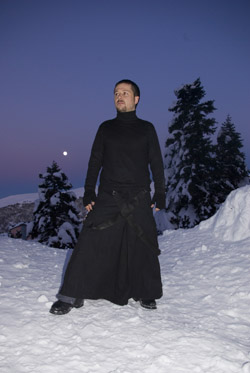 There’s a different song from the other with it’s intro, and I liked the song very much. I talk about “Raise Your Hands Through Darkness”. I guess Melif from Reborn has contribution on this one with the keyboards, right?
Absolutely. I told you before, we had a great understanding with Melih about the orchestral songs that I wanted to compose. His expertise and experience on the keyboard made me more free and made the compose exactly what I wanted it to be.

You have a product on the market in 2010. For that I know you, I heard something about you in personal chats. It seems you will make your fans wait long for the new album again. If someone wants something with you, compilation-split or new compositions, when do you think you start to play again?
I won’t start while it’s so hot, that’s definite. I’ll wait it to cool down. Neither my mood nor my physical condition allow me to compose 🙂

I think Ezayah will always be a one person project, right? Would you want to play on a stage if a nice organisation made an offer?
Yes, actually I sometimes think about forming a concert band but I have no time. Plus, I don’t do things just to do them. If I do that someday, I am sure that it will be very nice.

This question is for the ones who don’t know about Ezayah’s philosophy. What does Ezayah tell us with “The Morning Star”?
To sum up, we can say it tells about the interaction of a drop falling on a rock and an energy which is turning into the storm. But to be more clear, I try to catch a momentary timbre of the universe and the world I live in. That’s why I use the ‘athmospheric’ adjective. Everything on and under this sphere effects me and I try to tell what I feel it my songs.

You certainly are following some bands, who does Emrah listen to?
Nowadays I listen to Alcest. Seriously suggested.

Proggresses in the recording technologies and the Internet helped many bands to make something on their own and put them on the internet. What do you think about that? Is it going bad musically or is it positive?
I feel glad, variety is good. But sometimes I come up with a project which has a song of 6 minutes of wind and some notes, I think we all should be more creative. But sometimes I find very good experimental works too.

Before the last words, what do you want to tell to the ones who want to buy “The Morning Star”? You know it became common to share songs in a simple video. This is theft too. What do you think about that?
This is a nice point from you. Many things changed since 2002. The Internet became common and almost destroyed the underground. And some sites talk about support to the local bands, but I don’t think that is enough. Many of my friends recorded web albums. I thought about that too, but I didn’t like it to be just imaginary. I ask the listeners to continue on supporting the underground. The thing that keeps this soul alive is underground, never forget that. Underground is real you and us. Just music, no big profit aims. Just the music coming from heart and soul.

Light only shines upon the darkness…