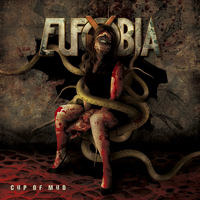 WIZARD LTD (www.wizard.bg) announced that a deal for a worldwide distribution of the new album of EUFOBIA was inked with TWILIGHT DISTRIBUTION (www.twilight-vertrieb.de). The German company TWILIGHT-VERTRIEB GbR is a partner of WIZARD since two years and is known for its huge catalog and excellent distribution of modern and extreme metal.
“EUFOBIA – Cup Of Mud” WIZARD / TWILIGHT DISTRIBUTION will be distributed in:
GAS = Germany / Austria / Switzerland;
Rest of Europe + UK;
Japan, Taiwan, South Korea;
U.S.A.+ territories of the rest of the world.
The official worldwide release date is announced to be the 16teen of September!
We shall remind that “EUFOBIA – Cup Of Mud” was released for the music market in Bulgaria and Romania on 6th of June. More news are coming up!

FERAL ''Dragged to the Altar''