Danish thrash metal band ESSENCE has returned from the studio presenting you their brandnew album “Last Night Of Solace”. The winner of the Rock The Nation Award 2012 was working inside the infamous Abyss Studio with the legendary Swedish producer and multi-instrumentalist Peter Tägtgren – hailed by many as the “Rick Rubin of Scandinavian Metal”. With „Last Night Of Solace“ ESSENCE made a major step forward, both sound- and songwriting wise. With every song the band deliver a very fierce mix between Destruction and Sodom. It´s a thrash metal bombshell par excellence!
ESSENCE comment on the new album: “Last Night Of Solace is very different from our last album. We have matured in our songwriting, our abilities and our expression. It is difficult to describe the album with words, but ‘enormous’ covers a lot of what the listener will hear on the record. We needed to make this album the way it is today, because it is a statement and it will serve as a point of reference in the future. Also, we did what came naturally and ‘all by itself’ to us. There is nothing ‘forced’ on this album and it is just our clean personal energy captured on in 10 tracks. You can hear that the album is recorded in extreme sub-zero temperatures and in the middle of a frozen Swedish winter.”
Now the band has unveiled the album cover of „Last Night Of Solace“
Tracklist: 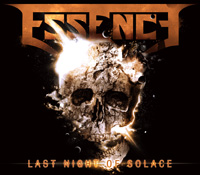