The Bulgarian Death Metal Band  Enthrallment has released a new video clip online for the song “Fruits of Pain and Blue Sky”. The track is taken from the new album of the band “People from the lands of Vit”, which was soon released by the American label United Guttural Records. In the Myspace page of the band, you can hear the song “Chronicle of Sorrow” with a guest – vocalist Scott Wily. 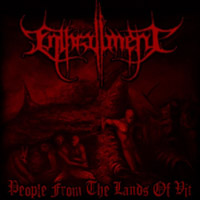 Tracklist:
01. Chronicle of Sorrow
02. Devoted to Delusion
03.Psychological Storm
04. A Land Full of Worms… From the River to the Void
05. Chemical Romance
06. Obsessed by Just Anger
07. Walking Through the Thorns
08. Fruits of Pain and Blue Sky
09. Punishment for Baneful
10. Unholy Diviners