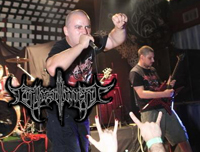 On 1st March 2011 the Bulgarian death metal band Enthrallment will enter the studio to record their third album. The album will contain 9 new songs full of eternal pain. They will make a video to one of the songs. At the moment, the band is looking for a new label. The members of the band expect their album to be released as late as the end of 2011 or the beginning of 2012.