Hi! What`s up? 🙂 Are you ready to "fight" with my questions? 🙂
Let’s do this. Lead guitarist, backup-vocalist, and band founder Matt Brown checking in.

You`re from USA, but I hear a "swedish" inspirations in your music. Is this correct and if yes could you explain why that is? Which bands from that region are the most interesting for you?
It is true. Some of the music we have written so far does have some Swedish death influence to it. I think this is mainly due to the fact that Mike Low, our original second lead guitarist, and I were very much into that style when we were writing our first demos and debut record, Our Cursed Rapture. We were really into bands like In Flames, Soilwork, and of course… At The Gates! 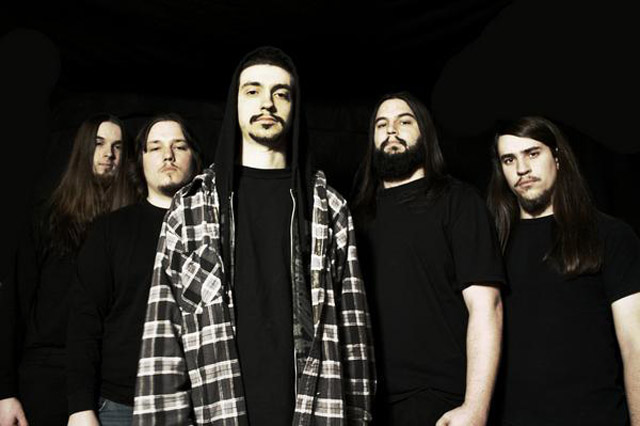 Your vocal is quite similar to the Cradle Of Filth singer. Is that a petty matter for you or are you proud of this comparison?
Our Cursed Rapture’s vocals were performed by both myself and Justin Corser. To be honest… during the time that I was learning to write lyrics and vocal patterns, Cradle Of Filth was an absolute obsession for me. This time period was also around the time that I was writing OCR, so the end result was an album with quite a few "Cradle-isms" — at least when it comes to the vocals. I am actually pretty proud of the almost 100% replica of Dani Filth that Justin Corser and I pulled of on that album because it was pretty meticulous to record and pretty difficult overall. So all-in-all, yes, I am proud of this comparison when applied to Our Cursed Rapture, but I must stress how we are going to strive for the development of our own style on future releases.

You show in your music that you`re a very good, technical musicians…How long do all of you practise and play music instruments every day?
We usually play at least an hour a day if we are busy with work and such, but if we are free from our enslavement, we usually dedicate several hours to either writing or developing new guitar skills. We also tend to practice as a band at least once a week. 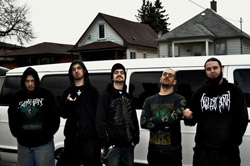 What about the people in USA? Are they focused rather on American metal scene or are they often following the European bands too? Which differences do you see between American and European style of playing metal?
No comment.

“Our Cursed Rapture” is your last album. How do you evaluate this album and how have the general reactions to the CD been so far?
It has been pretty good. It was released in 2009, but we still see people buying it online and at shows. I’m not sure about stores… but who actually buys records from stores?

You’re signed to Sumerian Records. How did you end up with them?
We played a show with The Faceless in our hometown of Nashville, Tennessee in March of 2008. Mike Keene, guitarist of The Faceless, noticed our performance and approached us about signing with Sumerian. At the time, Mike was acting as somewhat of a scout for the label, and he was our connection with them [Sumerian] initially. After that, we went through the lengthy process of sending them demos, getting a contract, negotiating that contract, and finally… by the fall of that year we were signed to Sumerian Records. However, nothing started happening for us until mid-late 2009. I think we were actually announced in 2009, although we had actually been technically signed for almost a year at that point. 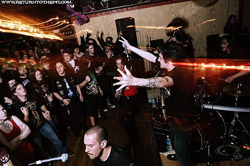 Do you take care of things like t-shirt designs, booking shows and that sort of things yourselves or is it something that label handles?
We have a booking agent who books our tours, but we generally take care of our art. Sumerian has an inhouse graphic art designer who takes care of the presentation of certain pieces of art (for CD’s and things like that). We also have a budget for designs for t-shirts, so we usually get artists to design shirts with a certain theme to them.

You`ve played the tours with a famous metal bands like The Faceless, Dying Fetus, Goatwhore, Burning The Masses. Which guys were the best comrades in touring and why?:)
We have had a blast with all of the bands we have had the privilege and honor to share the stage while on tour… but I must say going on tour with the legends Dying Fetus and Pestilence were the highest of all honors bestowed upon us!

What is the craziest shit you’ve experienced while on tour? 🙂
Hmmmmm… our van breaking down at a coke dealer’s house who was also the promoter for a show we played would probably top the list. We stayed there for like three days. He continuously provided beer and food while he dealt coke to people of the higher echelons of his city (such as judges, city councilmen, etc.). We even spent Easter Day with him and his family. 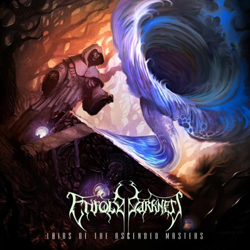 Your lyrics seems to be inspirated by ancient mythology. Why did you choose this topic to write about? How strong is your inspiration of ancient stories? Are studying history or are you only a passionates?
I studied Anthropology and Archaeology during my time at unversity, so I guess you could say that this greatly influenced the lyrics found within OCR. I’ve always been into ancient history and mythology though. Even as a child I was into Egyptology. So… I guess you could say that I’ve always had a mind for these things because of curiosity.

I see, that your lyrics are connected with a occultism/luciferianism (?), because still establishing and fascinating the "dark side power". Are you into this things? How important are your lyrics for you?
My beliefs are ever evolving, so I couldn’t honestly say that I believe in these things at face value. However, I believe there are many truths found within the occult if you search deep enough.

Did religion have any impact on you growing up?
I grew up in a Christian home; although I can’t say I ever believed. I always questioned the message of "the gospel."

Your all time favorite death metal album?
Can I only pick one? Hahaha

As it is today, what would you say are some of the biggest problems with the metal scene today?
In the United States? The problem is a lack of unity. The scene is completely fractured. People only go out to the shows that their clique fits into. Trends are another thing. Your real metal fan doesn’t care about this, but there are a lot of people out there who don’t really care about metal but rather only what is popular. That’s why metalcore got so popular in the early 00’s and deathcore later in the late 00’s up to the present. They are trend oriented, and therefore, they sell the most. Because they sell more, the labels give them more attention, and the vicious cycle continues on and on — all in the name of cash.

When you’re not touring and playing music what do you then do for a living?
We work day jobs. Our current vocalist, Adrian Perez, works as a photographer; both Jack and I work at America’s organic supermarket, Whole Foods; James does construction and fabrication work; and Elijah is the Assistant Manager of local a restaurant. 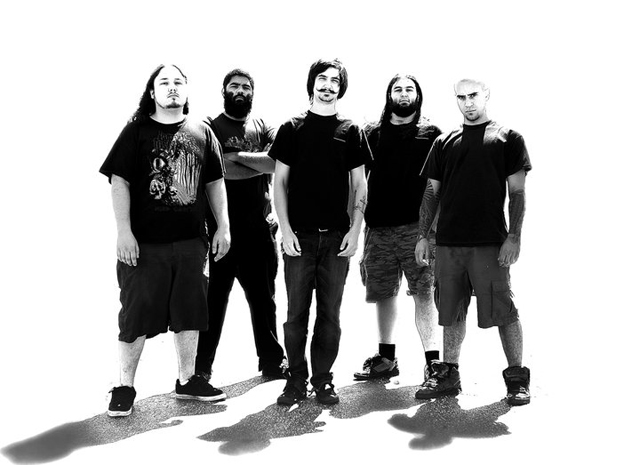 What next do you have planned for the band?
We plan to be the progenators of a new subgenre of metal — that of technical black metal.
We are releasing a new album that will feature close to an hour of music sometime later this year, but first we are going to go on THE SHRED TILL YOU’RE DEAD TOUR featuring ENFOLD DARKNESS, ABIOTIC, VALE OF PNATH, and AFTER THE SPIRE. Go to our Facebook for more information

Anything you’d like to add to conclude this interview?
To get a preview of our new style, check out our new song, "Lairs of the Ascended Masters", which is streaming on the Sumerian Records YouTube Channel. If you like what you hear, please leave a comment, and share it with your friends! AVE SATANAS!