Denver death metal band ENEMY REIGN announced the release of Tormented To Oblivion LP next month! The nine track slab of wax will feature remixed and remastered tracks from the band’s ravaging (and unreleased) Diametrically Opposed EP featuring original throat Sherwood Webber (ex-Skinless) as well as remixed and remastered choice cuts from their critically-lauded, Between Hell and Oblivion full-length. Preorders of the Tormented To Oblivion vinyl edition are currently available for via the band’s official website and will be officially released on May 15th. The release will also be made available digitally via iTunes, Amazon etc. and includes a total of 15 songs — 11 remixed tune from Between Hell And Oblivion and four Webber tracks.
Tracklisting: 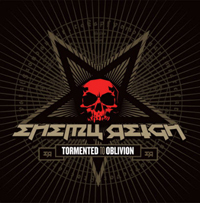