Greetings and welcome to Extreminal webzine.As a starter present EBONYLAKE and its members to our readers?
Both Ophelius & Mass are the sole musicians responsible for this cacophony. We play every note within it, and share musical duties when needed across various instruments. However several witches whom reside in the nearby woodlands bordering the Moors, did rein act numerous incantations and chants to the proceedings. 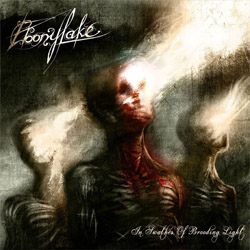 Your debut album "On The Eve of the Grimly Invented" was released in the distant 1999.What took you more than ten years to come up with a second record?
We left these shores upon a maniacal vessel, at total breaking point both mentally and physically. The sect we had bonded together broke down in so many ways, one by one we stepped overboard and fell silently into the seas beneath us. And there we festered upon the oceans floor for some would say almost a decade…only two survivors of that dreaded voyage have risen from the murk. Something or some kind of positive energy has we feel brought us back together eventually. Even though living complete separate lives to one another, and not knowing of each others even mortal existence . We both had things strongly pulling us the same direction, that this was not complete and more should be done under the banner of Ebonylake. Its very surreal how all these matters have come to fruition, spoken from another time or a distant voice that culls you with the chill of the bleakest of Autumn sunsets.

What is the difference between the second album "In Swathes of Brooding Light" and the debut ?
We wrote this album over a period of almost 2 years, but the times we could actually get together and physically work together were limited. Hence the time it has taken to put this into a format we are both happy with collectively. We are sure if all the time we worked on this added together it would have taken 6-8 months to fully envision and decipher the projections in our minds. Old ideas were long forgotten, we did have around half an albums worth of songs for a follow up "on the eve if the grimly inventive", but these recordings were for ever lost in time. The writing personal has not changed from then to now, but we did have 7 members when we last recorded "On the Eve of the Grimly Inventive. We feel it has evolved and progressed forward but has the same DNA running throughout both pieces of work. The main difference is that we have had total control and time to put this together at our own leisure rather than a time period allocated to a recording studio for several weeks. The sound is really a continuation of where we have always been, something leftfield and not quite comfortable that niggles at your spine and teeth. In Swathes has a more visually cinematic feel to it as apposed to On the Eve, but both releases sit along side and compliment one another very well. I doubt anyone coming from the perspective of On the Eve will be too shocked, if they understand that album and get the vision then they should have a better understanding of In Swathes beforehand rather than coming in from the cold.

EBONYLAKE used to be a band of seven members but now there are only two left.Where did the other five disappear ?
The other 5 members Sighmon W. Yasmin, Christopher Gallious, Arian, & Amber succumbed to the madness and have moved away from musical desires and lapsed into mental states of horrific visions. We have not seem many of them since the band split back in 2000, however we may as yet involve one other past member in some capacity on the next release.

How will you define your style of music ? Which one is your main source of inspiration?
Violent Abstract Surrealism, The music tends to compose itself to some degree, it is almost as though it is channeled through us from another time and place. When we enter the Ebonylake world we take on various characters, we are mere puppets to the spirits that take control after the séance. We often awake from the rituals exhausted and try to make meaning of what has happened both musically and spiritually. We can lose ourselves in the writing process and become one with the sounds cape we are attempting to project. EA Poe has an influence upon the music to some degree, as do many other authors whom painted great pictures with words of such abstract horror and feelings of un ease. We use the musical canvas to attempt to create visions such as these in our minds. It is very surreal how these ideas are projected from almost another time and place. Our quest to make music that is genuinely unsettling with different sounds clawing at your skin from out of the darkness has never ceased, and our outlook as only become more fearless. Some of the most profound influences came from (and still do) the worlds of literature, poetry, art, contemporary music, film and classical music. Names such as Bram Stoker, Lord Byron, Sergei Prokofiev as well as films like The Omen, The Devils etc all got our creative juices pouring.

Who writes the lyrics and what are they dealing with?
Again the lyrical approach comes from a similar situation of writing or deciphering the music. We put pen to paper and it just flows out from somewhere another place or time perhaps… although some of the misguided have said our rectum hahahah. Almost as someone else is putting the words into our heads, its a dizzy and confusing paranormal state that invokes memories of the drunken scholar that resides in the Country Manor Estate . He who dances with the ghosts and commands the avian flocks to do his misguided biddings. A time of quaint gatherings by the river bank and frolics in the undergrowth, a time of beautiful and gallant memories… that was until the skies turned to grey and the menacing clouds began to weep such horrors that small children still cower at such tales to this very day.

Having in mind that EBONYLAKE is a band of two members – are you able to play live ?
Playing live is something that we have discussed recently, sat beside an open fire with a bottle of absinthe throwing ideas back and forth about set lists and stage production. One thing for certain is if we were to do it, it would have to be done right. The few live performances we did for ‘On The Eve….’ were well executed, we dressed in our period clothes and had stage effects to create a certain amount of tension. This time however if the live visuals were to match the sounds spewing forth from the stage we would need a large budget, so we feel that maybe in the future but not in the immediate future. We certainly have not ruled it out, but stripping the vast sound down to be audible through a concert PA system would be a challenge but not impossible.

How is the Metal scene in West Yorkshire ? Are there many underground bands in your area?
I’m sure most people will be aware of the bigger named bands from the West Yorkshire areas of England, but yes there is many many bands in the area. Most genres of metal are present from death black thrash doom to a varying degree of potential . However most people from around the metal world would maybe pin bands such as My Dying Bride, Paradise Lost, and various members past and present of Cradle of Filth notorious within the Yorkshire community.,Also bands such as Evile, Solstice, Bal Sagoth, although the later Bal Sagoth dont count because they reside in the cloth cap mining community of South Yorkshire. But yes a healthy band scene in general exists here.

Do you have any side-projects besides EBONYLAKE?
We have other interests and are involved to some degree with other projects, but we wish not to promote them via interviews for EbonyLake.

Who are the bands/musicians that have inspired you to start playing music?
A huge plethora of many musicians have inspired from a very young age, but we keep these influences locked away when writing anything involved within ebony lake . When we first began writing, it was very natural how ideas and imagery came together in musical form. We know how the world of EbonyLake should sound to us, these projections were merely transmitted through our beings from another dimension and time. How we communicate them not only with ourselves, but with outsiders is a very exciting experience. However as the painting is slowly crafted other aspects of emotion and misery become more apparent and turn in another direction. We just follow the path and see where it may lead us, either into a glorious summers meadow overblown by tranquil beauty and wildlife near the riverbank. Or into a torrid nightmare hallucinogenic portal, where swirling violent sea storms pull and run aground your feeble vessel and leave you savaged among the coastline. When we begin to enter a phase of writing for Ebonylake we leave behind all musical influences and let the puppeteer guide us, we are but his human mannequins.

What do you expect from 2012 both for the band and for you personally?
We are putting the jigsaw together as we speak, we have several ideas in early formats, but work is in progress in the writing department. We intend to have séance this evening with our newest acquaintance from the unearthly dimension…what they bring us as gifts is a mystery to us at this point. The new material shall hopefully be completed before the end of 2012, but this is not set in stone. We can however reveal that Ebonylake will be working with a fully professional 20 piece choir and chant section for the next album, that in itself has already caused a flood of reactions that will bear much fruit in the future were sure of.

Last words?
Thanks again Cenk for the time to explore the lunacy of Ebonylake, we got there in the end. A new movement stirs… Violent Abstract Surrealism.