The last album of E-Force came out in 2008 and we have no news on the new one…
Eric Forrest (bass / vocals): Well, we were supposed to record a new record last Summer. It’s a concept record, it’s called “The Curse Of The Cunt” which is about what men and some women will do and have done to get a piece of the action, so to speak. We’re touring right now because of the problems with the label. And the manager went missing, got murdered, suicide, he’s in Las Vegas or something, I don’t know. So we have to wait again ’til mid this Summer. It’s basically a year delay so we were like: “What are we going to do? Let’s play!” We are going to continue the writing anyway. We’ve got about eight songs completed. And we’ll do more shows in the Summer and in September. It’s pretty hard for a lot of bands these days because of the money and the downloading, nobody buys CDs anymore. I feel lucky that I can continue to do E-Force records with the record label paying to do it and releasing it. I don’t expect to make money, it’s more like a professional hobby that I’m doing at someone else’s expense.

I’ve got some questions to you about the Voivod years. How did you get to Voivod back then and in which bands or projects were you involved before?
I was in a band called Thunder Circus as just a singer and played in a cover band after that. I auditioned for a band called Saints And Sinners in ’92 for bass. I didn’t get the gig but I knew the drummer ’cause he was a friend of mine and I kept in touch with the ex-manager. In Summer ’94, he called me up and said: “I have something very interesting for you. Come to Montreal as soon as possible.” And I was like: “O.K., I’ll be on the bus tomorrow.” We went to the studio right away and jammed with the guys for like ten minutes and then they suddenly stopped. I was like: “What?” “O.K., that’s it. You’re in the band. Let’s go for a beer.” It was really the right place and the right time and be ready, that’s what that was. 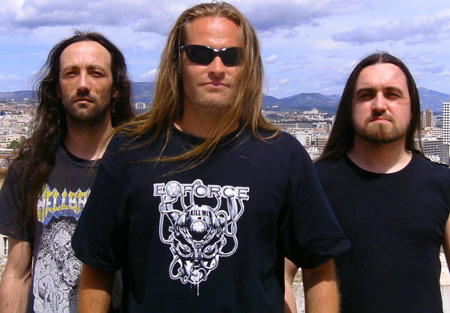 Did you already know the guys personally?
I had actually met them in Toronto on the Angel Rat tour. They were really nice guys. It was kind of ironic how I had the opportunity to play with them.

You’ve done two albums with Voivod: Negatron (1995) and Phobos (1997). How do you recall the songwriting process and the studio sessions? To what extent were you involved in the music and the lyrics?
More the lyrics. And a few riffs. But the majority of the music was Piggy. He’s Riffmaster P, that’s what I used to call him ’cause he had the good riffs and the ideas. Away had the subject matter and the direction, I co-wrote the lyrics with him. I brought all the lyrics to some songs, half of them to some and I had a few riffs that I played to them and they liked. What’s really funny is that song called Vortex which is on the Kronik album as a previously unreleased track which has a bass line that I wrote as a kid, watching the Ravenous Medicine video and the riffs are kind of similar. So it’s kind of funny how it went full circle: I stole it from them and then it ended up in their band.

How would you sum up all those years spent in Voivod? What are the most important things that you learned about human relationships, musicianship, music business etc.?
I really learned a lot about songwriting. Just being in a professional band to a certain level. I kind of take what I learned from them and apply it to what I do now. I don’t know what to say other than it’s interesting, a great opportunity and experience. And I’m really grateful that I had the opportunity to do it. 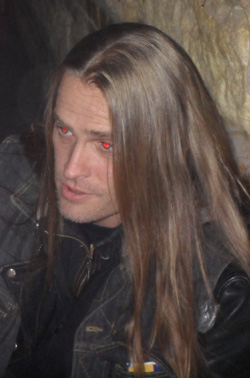 What was the reason you left Voivod in the end? Did you parted ways on friendly terms? Are oyu still in contact with the guys?
Yeah, of course. To be honest, I never quit Voivod. I would say that I got fired in a nice way because we had a meeting back in March 2001 and the guys said that they don’t wan to continue anymore as a band. I honestly didn’t believe it, I thought Snake was coming back. And then I heard they had Snake and Jason (ex-Metallica) in the band. So what can you do? I mean, there are no hard feelings. It was always their band and I always followed their need, what they wanted to do – and that’s what they wanted to do. At that time, we were supposed to record a new record which still had twelve unreleased tracks, demo tracks. But we had money problems and they had the opportunity to work with their ex-singer and the guy from Metallica, so that’s what they did. Looking back at it now, they kind of gave Piggy a few extra victory laps before he passed away unfortunately. Obviously, he did more with those guys than with me, they toured with Ozzy Osbourne at Ozzfest and stuff like that. We’re still friends. I joined them last Summer at the Hellfest to sing a song with them on stage. I called them just to try to get some free tickets and they said: “Yeah, O.K., sure but you’ve got to come up and sing a song with us.” And I was like: “Yeah, of course.”

Do you agree that Voivod is typically a band that never had the recognition and respect that they really deserved and meanwhile influenced a lot of musicians who learned from them and achieved much more popularity?
I think it’s fair to say. I mean they’re real artists, they enjoy what they do and just keep doing it, like any artist, even today. It’s not about what’s going to happen to the record. It’s more like: “Hey, we’ve finished the record and we have another trophy for the collection and whatever happens, happens.” And I think they look at it that way, too, as I do it today with E-Force.

Speaking of which, do you consider it a permanent band or just a temporary project?
It’s a permanent band for sure. I’ve put the band together back in March 2001, the afternoon after I got the news of Voivod, so I started it right away. It’s pretty serious but it’s slow. It’s not super busy, but we do what we can. We make the most out of it. I call the band E-Force ’cause it was my nickname in Voivod. Actually, it’s a guy named Ivan – who used to be in a band called Men Without Hats and who wrote the lyrics of the song called The Tower (on the Phobos record) – who came in one day and said “E-Force! That’s your name.” And everybody, smoking a joint, said: “O.K., cool. Yeah!” So I call it that for a few reasons. It’s a connection, a continuation from Voivod, in a way. And it’s about control, too, in a sense that I can do what I want to do. Not in a bad way, it’s just that I can drive the ship, knowing what kind of metal I want to play. 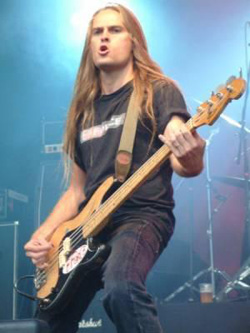 Are there any particular advantages or disadvantages for Canadian bands, let’s say, comparing to bands from the USA, as far as record release possibilities, distribution or touring go?
I’ve been living in France for seven and half years. I think it’s better in Europe than in Canada, for sure. But what can I do? That’s where I’m from, that’s what I do. Is it better in the States? Yeah, maybe, but not for every band because there’s a lot more competition, too.

What are the main differences between living in France and in Canada? I mean, regarding culture, mentality…
It’s the French spirit, the food, the people… It’s pretty. Tolouse is not a huge city like Montreal or Toronto. It’s slower. But still there are some asshole idiots like in every town, so that doesn’t change. But I like the culture, I really do. The food, the meetings and rendezvous, the tranquil, enjoying life… I’d live in a crypt if I could, ha ha! But I like it. And there’s a lot of good bands there, too. A Morbid Angel like death metal band called Fleshdoll are friends of ours, they’re on the same label, Thundering Records.

You’ve had several line-up changes with E-Force. Are there any particular reasons for that, besides your moving to France?
I moved to France for personal and business reasons. I got married when I lived in Montreal. The girl was from France. She wanted to go back and asked me if I wanted to go with her. I said O.K., so that’s what happened. I kind of fired the other guys and found new ones. We did a 23 day European tour with Carpathian Forest in 2005 with the guys I have now. But after that tour we parted ways… It’s not by choice, it’s just because circumstances and it’s not easy for many different reasons. But I’m back with the guys from 2005 now, we’re touring and doing a record…

The first E-Force album came out on Season Of Mist. What about your current label?
It’s a label in France called Thundering / Pervade Records. They are able to distribute our record in France, in Germany, in Japan and in a few other countries. These days, it’s fine. We want to record the record by mid Summer and hopefully have it out before the end of the year.