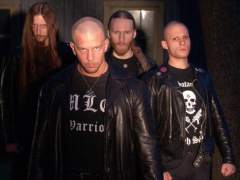 “As a result of bassist Haakon Forwald’s family situation back home in Norway and his initiatory work with the Norwegian cell division of the Misanthropic Luciferian Order (MLO), it has been decided that Forwald will step back from the position as DISSECTION’s bass player in order to focus on his esoteric and exoteric work in Norway. DISSECTION wish Forwald the best of luck on the path to anti-cosmic gnosis and thank him for his time with the band. This will not affect the two upcoming shows in Sweden and Germany booked for December and January [December 30 at Kolingsborg (The Shrine) in Stockholm, Sweden and January 28 at the Winternoize Festival in Osnabrück, Germany] where DISSECTION for the last time ever will perform a set based solely on the old albums! Bass player candidates already exist and are currently being tried out in rehearsals!”

DISSECTION recently reacquired the rights to their classic “Storm of the Lights Bane” album from Nuclear Blast. In addition, Black Lodge’s licensing rights to the group’s 1993 debut, “The Somberlain”, will expire in December. Both albums are currently out of print and will be re-issued by the label to which DISSECTION will sign for their next album.

DISSECTION entered the studio on February 2 to begin recording their long-awaited third album, the group’s first release since “Storm of the Light’s Bane”. The recording is taking place at Black Syndicate Studios in Stockholm, Sweden, with DISSECTION mainman Jon Nödtveidt’s brother Emil Nödtveidt (a.k.a. THE DEATHSTARS’ Nightmare Industries) and Skinny Kangur at the helm. Eleven songs are being recorded for the album and the material is being regarded by the band as “a work of sonic black magic, actively channelling the anti-cosmic current 218.” Rough-mix versions of two new songs from DISSECTION’s forthcoming CD are available for download on their official web site. Check out the tracks “Xeper-I-Set” and “Starless Aeon”.

DISSECTION are currently in negotiations with several labels for the upcoming release, but the recordings are being completely financed by the band itself independent of any record company. A final decision about the group’s new label home is expected to be made soon.