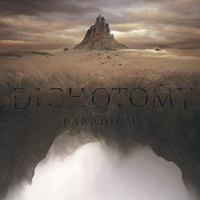 Irish tech death outfit Dichotomy will release ‘Paradigms’ the band’s debut album this August 14th. The album will be available physically as well as for digital download.
The five piece melodic tech-death metal band hailing from Dublin, Ireland draw influences from bands such as Death, Necrophagist, Gojira and Opeth and was formed in 2010 by guitarists Andy Kealy & Rats with a mind to combine the technicality of death metal with the groove and musicality of other genres. After establishing a lineup in 2010 the band began writing material under the name Dichotomy to suitably describe the contrasting styles used in the music. Summer 2012 bore the fruits of their hard labour as the band took up residence at the world renowned Westland Studios in Dublin to record ‘Paradigms’ with producer Alwyn Walker.
“Paradigms is about a multiple of things.” comments lead guitarist Steven ‘Rats’ Rahaman. “The 5 of us wanted to get together and write music that we would be happy to listen to ourselves. we all individually have a varied taste in music and style so the music we created had allot of contrast so the name Dichotomy was chosen. The lyrics themselves in Paradigms create a collection of dichotomies. So in a nutshell you could say that ‘Paradigms’ is about the band name which is about the music.”