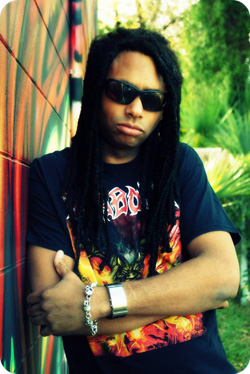 How are you Aantar?How is life going on?Is eveything ok under the hellish sun of Florida?
Aantar: Doing great man thanks for asking writing new songs and working a lot. It's summer here in the death metal lightning capital of the world. Finely got my home studio set up thanks to Brian Werking (Exmortis). Been tracking sadistic evil sounding riffs along with my signature helicopter double bass drumming. The new songs are sounding evil as hell!!!!

Let’s start with the question about your new writing and recording process,what things have you done and what will you do in this process of your new record?
First I lay down the drum tracks then go back and lair the guitars……send My ideas to the guitar players and collaborate ideas to create the goal…Unholy Twisted deathmetal at Blasphemous speeds!!!!!!! We have the songs just need the studio time and that cost money to record a great sounding recording. I know its been awhile since we released a full CD.

How have you been co-operated with your record labels ‘till now?I mean that any positive or negative things you have lived?
Record labels like Olympic/Century Media ,HammerHeart, DeathGasm Conquest Music really helped Diabolic over the years. We worked together with those record labels to release the most brutal Diabolic music.

When Supreme Evil album was hit to scene,I was very impressed with that album in that year,you know death metal scene was falling down and bands started to quit and Supreme Evil was a blasphemous,monstrous and courageous death metal album from Florida.What wations as the background of before the internet and Facebook Evil and can you tell us the behind scenes of year 1998 and Supreme Evil?
1997 we started writing Supreme Evil. We had a band house and it was none stop practice most everyday. We where starting the band and needed to create our own sound. Everyday after work we wrote new songs and setup shows and demo traded to Underground deathmetal bands around the world. We went to New York then California playing live trying to get a record deal. After the Milwaukee metal fest we signed to Conquest Music. 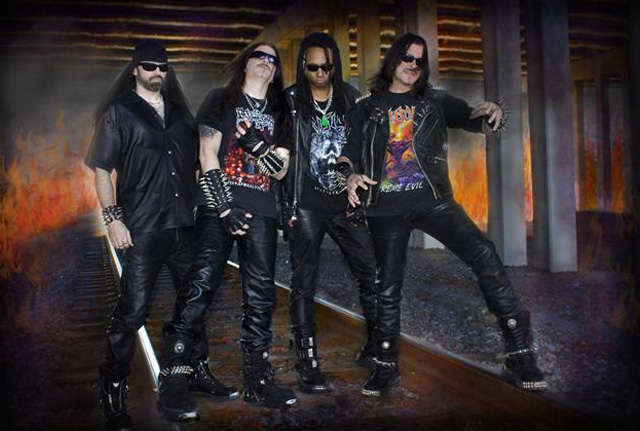 How did you start Diabolic?Can you tell us the times and the process of City of Dead?
I always had the name in mind, it just took time to find the right band members that could really play and really wanted to play satanic death metal at blasphemous speeds. City of the dead was a great time. Nothing could stop us. We all moved to Tampa Florida and where living our dream to play death metal. Our very first show we opened up for VADER at the Brass Mug here in Tampa Florida….the Death metal lightning capital of the world!!!!

As a drummer,you are really talented and a devilish one.You have a self-made technique on drumming as possible as I understand,and I can compare your blast-beats, drumming style and skills to old P.Sandoval.How did you start to play drum?What kind of practicing session generally you do?
My father showed me how to play when I was a kid. I took it seriously when I started listening to Dave Lambardo,Lars Ulrich and WitchHunter (Sodom),Away VoiVod. I would play Hell Awaits on 45 turntable speed then copy that speed practicing on my drums. Then I heard Terrorizer World Down Fall and I had to re learn the drums. I moved to Florida and started playing drums everyday 1990. Now I have a practice electro kit in my living room I play everynight. 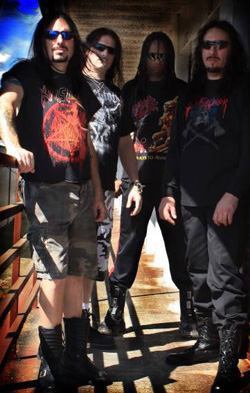 How did you contact with Petagno to make your artwork back in the day of Supreme Evil?Did you like his works?
Gean from Angel Corpse told me about him. I called Patagno and told him about the band and he did the art just for Diabolic

Have you ever interested in playing music except to death metal?What kind of music styles do you sten except metal and death metal?
No other music gives me the rush the DeathMetal give's to me. I listen to a bit of everything. Depends on what strip club Im at. Some clubs play metal but not all girls dance to metal so they mix the music up.

Are you contracted with a label now or still looking for a contract?
We have a label. I'm searching for a guitar player someone as good as Kelly and Jeff Parrish ((RIP )) passed away last year. The new Diabolic is written and almost complete …we Need live players not just studio musicians. Jerry did help write the new track Lucifer Induced and recorded it so maybe he will make a guess appearance. Now they can track the guitars from home.

I like your Unholy Ghost Project also,is it still alive?How did you start that Project?Any other projects you are or were in?
Check out Unholy Ghost music at Facebook. My past bands Ive recorded with include Exmortis,Necrosis,Horror of Horrors,Blastmasters. Unholy Ghost (Century Media)is not active but the music is alive and well. (Cduniverse). We still have a huge fan base and so many people that have never heard Unholy Ghost.I started Unholy Ghost after I got back from Europe touring with Diabolic. The record label informed me that I was out of the band (along with the Jerry and Paul) and we had to find a new name and start over. So we recorded a demo,sent demo's around the world played live shows. Got signed to Century Media it was awesome!!!

What about the times in legendary States' band Exmortis for you in the late of 80's?How did you start it and how was it ended?Do you think that Exmortis effected the scene?
Back in 1986 I put up an add at Washington Music Center in Wheaton Maryland / Drummer seeking guitarst /bass/vocals into Slayer/Sodom /Exodus/Destruction/Kreator. I got a call from Chris Weiser- Bass. He and Brian Werking – Guitars where into the underground demo tape trading seen. We setup a rehearsal and everything just clicked. We agreed on the name Exmortis and recorded the demo Decent Into Chaos. Exmortis played shows with Ripping Corpse , Corpse Grinder (George Corpse Grinders band from Baltimore MD) ,Ripping Corpse ,Fatal,Revenet,and Goraphobia. We recorded a second demo titled Immortality's End in 1989 and lost our practice room at Chris's house and could never secure a solid place to have band practice. We lived 40 miles apart from each other and that sucks if your trying to write new music. So to put it mildly we all went our separate ways. Exmortis where one other the pioneers of Death Metal and wrote some of the best Death Metal ever recorded back in 1987. Brian and I are still good friends and plan to work together in the future. He's a brilliant guitarist!!!!! Just listen to the song Exmortis. Ill never forget the first time I heard the first riff I was hooked!!!!

Is Kelly playing in your new album after he left Possessed?
Kelly said he would do it. Sending him drum track ideas now. 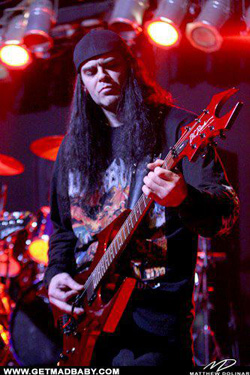 After Jeff Parish passed away,how was you effected from this bad thing as band and personally?Meanwhile,R.I.P. Jeff…
Its fucked up because he was not only a great guitar player completely dedicated to Diabolic but he was one of the coolest true Diameter Heads I ever got to know. He had a lot of great ideas and really lived deathmetal to the death! The demons took him away.

You have many line up changes since the beginning of the band.What are the reasons of it?Is really hard to stay alive death metal in the region of United States?
All of the past members where great bass/guitar players. Most all the Ex members of Diabolic went on to do bigger and better things that make them happy. I can't blame them for moving on and trying something new. I keep contact with the guys. Its not THAT hard to keep a lineup together…. its hard to find dedicated members.

You have been toured and gave gigs with lots of kick ass bands.Which tour or show you have very impressed?Any funny story to tell our readers as a musician?
Diabolic have toured with some great bands like InfamyBehemoth/Decide/Morbid Angel/Dimmiu Borger/Macabre/Enslaved/Amon Amarth/Krisiun/Cannibal Corpse. On the Dimu Borger tour the guys insisted we play sacraments of fiends off our Supreme Evil record. I remember playing at the Whisky A go-go in Hollywood and almost didn't get to play because the guards didn't think I was really in the band. I remember playing in London and this stage diver waited for my 4 count to dive on the first song! That wat awesome. I remember trading free beers so they could buy our cd. I remember flying to Los Angels and touring with Infamy. Josh Jager toke us to see Skid Row…NOT THE BAND!!! It was the real thing. People living in box's on the streets. In Spain I got lost walking back to the tour bus getting drunk at a crazy Metal bar and Inferno (Behemoth)found me.What a great guy!!! 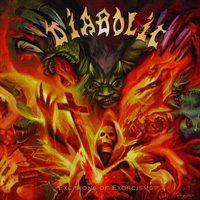 Let’s talk about the changes and progress in Diabolic from the times of Supreme Evil to 2010’s Excisions of Exorcism,can you narrate us that albums,changes and progress?What should we expect you in 2014?
Supreme Evil was hi tec Death Metal released on Conquest Music. Subterraneal Magnitude was super brutal and fast and brutal with heavy slow parts to get the mosh pit going. On Vengeance Ascending we produced a killer CD the production was aof due to deadlines and work schedules. Celestial Pleasures is the most played song off that CD to this day. I was in Unholy Ghost when they recorded the Infinity CD. I reformed Diabolic after I recorded Blastmasters “Twisted Metal” CD. Possessed By Death was another hi tec Diabolic DeathMetal CD./along with Chaos in Hell DeathGasm Records Released them both as a one CD then we recorded Excisions of Exorcisms our sickest album to date. Check out the tracks on Reverbnation.

What do you do in your normal life except to a death metal musician?
I ride BMX at the local skate park. Sometimes I skate. 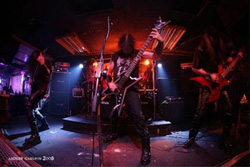 What are your favorite albums and bands nowadays as a fan and musician?Actually I am a fan of Diabolic,and I also wonder that what is your favorite Diabolic release?
Im a huge Hacavitz fan (Oscar Garcia Drums) I still love the demo bands like Immolation/Obituary/Krisuin/Napalm Death/Terrorizer/Cannibal Corpse/Suffocation and Morbid Angel.I don't have a favorite Diabolic CD. I love them all!!!

We have come to end this good chat,I just want to ask that how you define your music and Diabolic to readers who have never listened you before? Any last words to say to Diabolic fans of blasphemic death metal?
I define Diabolic music as Satanic Speed Death Metal at Blasphemous Speeds!!!!Check out our sick and twisted music at Facebook.