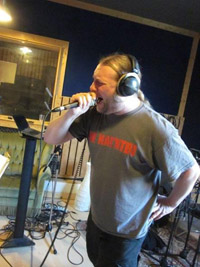 The band states, “We have worked withJörg already on ‘Incinerate’ for the recordings and then on the previous album, ‘Invocation’, for recordings and mix. It was an absolute pleasure to be able to team up with him again and the time we worked on the new music together in his halls pretty much went flying by! The best part however is: The final mix turned out really, really HEAVY, so much we can tell you already!!! Some songtitles off the new album are: ‘Sworn To Obey’, ‘Reawakening’, ‘Storm Within’ and ‘Gleaming Like Silver’.”
The group adds, “The new album will be released by late July 2012 via our good partners Metal Blade Records in Europe and Prosthetic Records in North America. The artwork was once again created by our buddie Björn Goosses / Killustrations, who we have actually partnered with since 2003’s ‘Impact’ release, so it’s been almost a full decade! Wow! The new album’s artwork looks totally stunning and we can’t wait to share it with all of you soon! We are right now finishing off the work on the layouts and just did a promo photo session this past weekend, so all things are rolling forwards…”
On the live front, DEW-SCENTED was forced to cancel its previously announced appearance at Chronical Moshers open air festival on June 9 “due to logistical complications on our end.” The band will also support Metal Blade labelmates SIX FEET UNDER on a run of shows in August.
For a complete list of upcoming dates, visit www.dew-scented.net.
DEW-SCENTED’s latest album, “Invocation”, was released on May 24, 2010 in Europe via Metal Blade Records and May 25, 2010 in North America through Prosthetic Records.