The first in a series of webisodes featuring behind-the-scenes footage from the making of “Conceived In Sewage”, the fourth album from Dallas, Texas-based death metallers DEVOURMENT, can be seen below. The CD will be released on February 19 in North America, February 22 in Benelux, Germany, Austria, Switzerland and Finland, and February 25 in the U.K. and rest of the world via Relapse Records.
Captured at Mana Recording Studio in St. Petersburg, Florida with producer Erik Rutan (HATE ETERNAL, MORBID ANGEL), “Conceived In Sewage” proves to be DEVOURMENT’s most eviscerating release yet, gushing with over thirty-three minutes of the band’s hate-fueled, monstrous brutality. 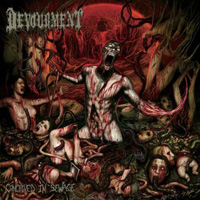 Tracklist:
01. Legalize Homicide
02. Fifty Ton War Machine
03. Conceived In Sewage
04. Fucked With Rats
05. March to Megiddo
06. Today We Die, Tomorrow We Kill
07. Heaving Acid
08. Carved Into Ecstasy
09. Parasitic Eruption
Commented DEVOURMENT frontman Mike Majewski: “This will be the deepest album we have done, for sure. Definitely expect the intensity, but also more thought-out song structures. I would say a bit of a throwback to old-school brutal bands, but with the signature DEVOURMENT elements.”
DEVOURMENT’s calling card is absolute brutality, and the band’s three previous albums and international touring and festival appearance have made them one of the more-talked-about acts in the worldwide death metal underground.
“Conceived In Sewage” studio webisode #1:
“Fifty Ton War Machine” lyric video:
Source: Blabbermouth.net