After their last full-lenght shit was released,I just wanna talk with head-guy of Deranged,Rikard,and shoot some scratchy questions to his fuckin’ brain! 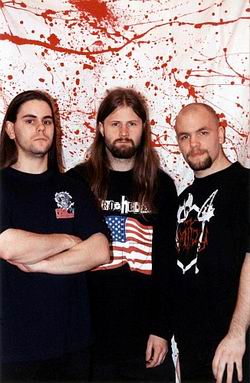 Hi,Rikard!How are you?What things are you doing nowadays?I think that you are fuckin’ busy with concerts and new release’s promotion of Deranged?
Nah, not really. We’re pretty much just rehearsing you know and will be doing like a a small tour down in Germany next week… As I understood the promos was sent out just a few days ago so the whole ”promotion thing” such as answering nice interviews like this one (ha!) hasn’t really started yet.

You have released new album ”Obscenities in B-Flat” recently.Can you tell about background and song builds of this album to fans?
It’ll be released any day now… Ehm… You know, as usual when it comes to Deranged we just wrote a couple of new songs, recorded them and that was it. No such thing as a concept or whatever. Just a couple of death metal tunes for all of our fans to fucking go nuts to. If you’ve been into what we’ve done under the name Deranged before, you’ll like the new disc as well!!!

Your bass player and singer,Calle Faldt,left the band in last April?Was he taken a part of new album’s song writing and recording section effectively in last January?
No, not really… I think he wrote like 2 or 3 lyrics. It’s always been like that with Deranged, Johan and I are doing the music and I’ll do the lyrics and the vocal patterns… Still, things always goes through us, it’ll say ”The Deranged Filter” so… Ha, ha, ha…

Ok.You pointed out that he left the band because of musical differences,so what are the differences?Is he interesting in this music style no more?
Yeah, pretty much.

Martin Schonerr joined the band as a singer in last April.Who is this new guy in the band?Has he ever existed in another band before?
Martin is basically just a friend that wanted to try out as he knew we was looking for a new singer… Things turned out better then expected. Besides being in Deranged, he’s playing the drums in Splattered Mermaids. Check them out.

I think that you are glad to work with Listenable rec.,coz you have been released 4 recs.from this record company after repulse rec
What can I say… They are pretty cool for being a label that is. Ha, ha, ha…

I heard that you had some problems with repulse rec.(R.I.P),when Rated-X opus was released and after it was.The same situation was for Regain rec.(the owner of this label was the former singer,Per)what I had heard.
I don’t know… That was ages ago. There’s always two sides of the story anyway so… No matter what kind of disagreements we had with Repulse, I still consider that it was a cool label, as in they released a good bunch of really cool records you know… Things have been pretty good for Regain since we left them so… Ha, ha, ha… 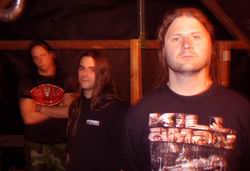 The first product of Deranged I had bought was Rated-X in 98 and I remember the same year I bought High on Blood and the both records were the killer and sickest releases at that years from the Sweden or an Europe country when the melo death and melo trendy fuckin’black metal shit were wandering around Europe.If we look at now,is deranged still the sickest band with this new album from sweden to you?And I know you hate rated-x album though many fans still like it,why?
-Why I hate Rated-X? Ha, ha, ha… It fucking sucks man! Ha, ha, ha… Hell, I don’t blame ANYONE for being into that record though, neither for thinking it’s the best we’ve done either. After all, I see myself pretty much as a fan of music myself and I mean… I like A LOT of bands earlier releases lots more then any newer release, no matter if the old shit has a terrible production and being simply very unmusical so I understand… Ha, ha, ha… If we are the sickest band from Sweden / Europe? Hell yeah!

When I listened ”Planfield Cemetery” in 2002,I thought that this is more recognizable album of Deranged as musically and recording style after your old albums and III album of course!And I smell some old stuff death metal more like Autopsy.What do you think?Can you compare ”Planfield Cemetery” and ”Obscenities in B-Flat”?
It’s the same band so…

You know X-mass is a killer festival,I am sure that you were bored to cancel that show.
Xmass fest. this year? It wasn’t anything we cancelled. We was told that we would be on it but all of sudden we couldn’t… That’s how it is.

What are the special and attractive sides of Berno studios?You recorded the best products at there.Which studio you recorded in for last album?
It takes us like 20 to 25 minutes going to Berno with car, its’ without a doubt the best place for this kind of music in Europe, we’ve been working with Berno for years so we know him rather well and yes, we used Berno for the last record (Obscenities…) as well… 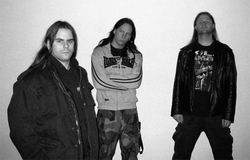 For the last 2 years,some swedish metal bands ruled u.s.a and all around the world and really selling good.Are you satisfied with this or you see this situation as fuckin’ trendy shit?
It’s pretty damn good and nice for the bands, right? Ha, ha, ha… I don’t care man. Mean, as for Deranged… Fuck, call us stubborn, narrow minded…and if you wanna put it in another way, cool, true or whatever… But we have always done our own thing no matter what was going on ’round us… That can people never say no to or take away from us.

Why you ate(or changed) many singers through your career :-)?I think Calle is the 5th one!…good apetite!
Yummy! We’ve been around for a couple of years as well… Ha, ha, ha… All the changes we’ve had in the line up have always been to the better. This is no exception.

Man,your drum style is really sick,old school and blasting as playing style and I want to point out it’s primitive as album sound.Can you explain your drum style?I think you don’t like new technology and digital shits?
As I see it, it’s not what you play, it’s how you play it!

Although I like horror-splatter-snuff etc.shits much more,I wanna ask this question…Aren’t you bored from horror-splatter content?Don’t you wanna do some different touch the lyrical content?
Nah… Why? 🙂

We left all questions behind…thanks for your interest to this interview,please take your gun and shoot some words for fans!
Thanx for the int. Be sure to check Obscenities… out and keep it up!!!