Mumbai, India-based metallers DEMONIC RESURRECTION have inked a deal with Candlelight Records for the worldwide release of their third album, “The Return To Darkness”, which was released independently by the band in January. 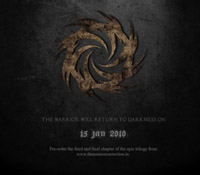 01. Between Infinity And Oblivion
02. Where Dreams And Darkness Unite
03. The Warriors Return
04. A Tragedy Befallen
05. The Unrelenting Surge Of Vengeance
06. Bound By Blood, Fire And Stone
07. Lord Of Pestilence
08. Dismembering The Fallen
09. The Final Stand
10. Omega, I

The artwork for the CD was created by Xaay, who has previously worked with NILE, KARL SANDERS, NECROPHAGIST and BEHEMOTH.

“The Unrelenting Surge Of Vengeance” video can be viewed below. The clip was directed by Vijesh and Vaas (SCRIBE).