Degradation, a metal/thrash outfit from Chicago, embodies the raw aggression of old school thrash along with technically driven song writing and addictive grooves. Degradation strives to set a new level in the heavy metal world with its strong emphasis on live sound, quality recording, high energy shows, and every note sounding "tight." I had a chance to talk with Alex about how the band got started, their new album, and their thoughts on the metal scene today!

Hey, thanks for doing the interview! How’s everything going?
Alex: Hey, things are going great! 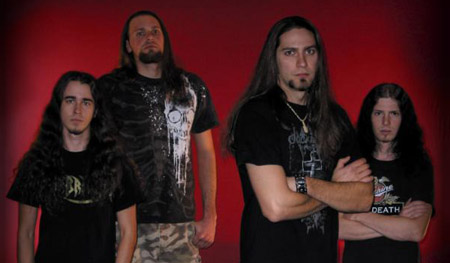 Can you give us some background as how Degradation got together?
Sure! Degradation started back in 2000/2001, Mike and I were taking guitar lessons from this guy Jimmy Weasel and we didn’t know each other at the time, Jimmy was running late but I hung around anyway just to make sure he was okay and then Mike showed up for his lesson. Jimmy finally showed up and said Hey, you guys are into the same type of music, how about we just do a double lesson? I was working on a Metallica and he was working on a Pantera song so I said sure, I don’t mind learning that, I like that Pantera song so he taught us both. I had just recently gotten kicked out of my band at the time so Jimmy mentioned that we should swap information and see what happens and we’ve been jamming ever since. My brother Joe was in a couple other bands at the time and he was my cool older brother and I always wanted to be in a band with him and we’d be showing him our songs to get his opinion. Finally, I think either he quit the bands he was in or they broke up and I finally asked what he thought about jamming with us. At first he wasn’t too sure about it but once we jammed it really clicked and the three us have been consistently playing ever since. I think we’re on our fourth bass player now, I don’t know what it is but we’ve gone through more bass players than anything. I wasn’t singing at the time, our previous bass player was but we both knew he wasn’t too serious about it so it was kind of a mutual thing for him to leave. At the time we had a bunch of gigs lined up so I agreed to be the singer just to see how it would work and everyone really liked it and I’ve been singing ever since. 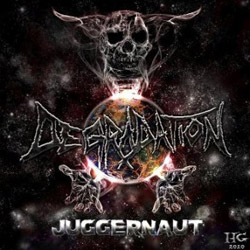 That’s awesome, how’s the feedback been for the album?
It’s been really outstanding; every review we’ve gotten has been good. Except for one, it wasn’t really a review but a guy commenting on our Facebook page saying that it wasn’t his cup of tea but keep up the good work. Which is good, it’s honest and that’s what I want to hear. But I have to say, and the guys agreed at the last band practice, that your review so far has been our favorite. So we had to thank you for that.

Anytime, it’s a great album. You can tell that there’s a lot of heart and soul put behind the music.
That’s the biggest thing that we wanted to put into the record. Our energy and our heart. It’s really a great record for us and we’re really fortunate.

How would you describe it to people who haven’t heard it yet?
It’s a lot smarter of a record for us. It’s not fast just to be fast. We all took the time to better ourselves before we recorded this at our instruments. I actually stopped and learned how to sing, learned how to control my breathing. Mike, our lead guitar player has been practicing his butt off for the past year. The bass player, Mike Feldman is just an outstanding bass player. Probably the best player I’ve ever played with. My brother took the time to step up the drums. That alone is a recipe to make a great record. It’s smart with groovy riffs and flows really well and to me it’s definitely bone crushing, I love it. 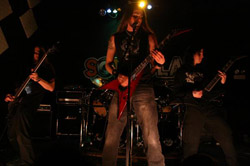 Right on. So there’s a pretty good story behind the production and mixing of the album can you tell us what all went on with that?
Yeah, no problem. It was recorded and mixed by Jonathan Clarity at Progression Productions which is where we did our EP. It’s in a suburb about five minutes from us and he does outstanding work and has such a good ear and vision and puts his heart and soul into it. The mastering which is the good story, it was actually done by two people. The first was Flemming Rasmussen who did all the old Metallica records. Super nice guy, I was talking to him a year in advance, trying to get everything done and scheduled. We were so looking forward to it. I mean c’mon, everyone loves all the old Metallica records and I figured the name alone would help us besides his quality of work. So we send it over and we send it back and I kid you not, it sounded like garbage. It was awful and I really hope hears this and I hope everyone hears this. I showed this to Jonathan and pretty much everyone and their mothers and they couldn’t believe that it was him. They thought it was his assistant or something. So we politely gave him suggestions to make it sound better so he worked on it and he sent it back and it was still terrible! We didn’t know what to do; we didn’t want to put this out. We had spent money on this and we had no backup plan. Luckily a friend of Jonathan’s was there, Dan Precision and he couldn’t believe what Flemming had done. He really liked our record and offered to master it. He sent us a sample of what he could do with our songs and it was like night and day. Such a great sound. He was so smooth, so easy to work with. Just a huge a weight off our shoulders and I couldn’t be happier. All the artwork was done by mo lovely and sexy girlfriend, Heather Gaffney, and she did a fantastic job.

What are some inspirations behind the album?
I pretty much wrote the lyrics for the album except for a few that my brother helped me out on. The album really jumps back and forth between issues in my life. Either past relationships or current issues. Most of the lyrics are the fear or the question of heaven or hell or what am I doing with my life or where it’s taking me. I pretty much get everything out on the album and I’ve gotten a lot of good feedback from it.

Where do you hope to see Degradation a couple years from now?
Well, we are playing shows all the time and they seem to be getting bigger and better all the time. A few years from now I would like to be working on an album for an actual record company or for some sort of production and get this album or another album out into the masses. I really hope to be doing this for a living. That’s all we want to do, is to play and have fun. 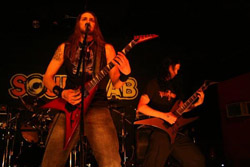 I totally agree. Who have been some of your influences over the years?
Hmmm…obviously the Big Four. Definitely Testament, Megadeth and Metallica are huge to us. But there are two Swedish bands called The Haunted and The Crown and those two bands really influenced us all. We love them. But it’s not just metal that we listen to. We all have huge tastes in music. Anything from blues to jazz to classical to classic rock.

That’s awesome, that really helps with the music too. It helps the creativity flowing.
Exactly. Everything we love we incorporate in our music.

What are your plans for the summer? Are you playing shows or working on some new music?
We’re trying to play as many shows possible but we’re also picking our shows wisely so we don’t burn ourselves out and we don’t want to burn our fans out. But we’re trying to work on some out of state shows and open for some national touring bands as well. We just opened for Death Angel and Bonded by Blood and a couple others. We’re also working on t-shirts; we just had a new banner made. Things are really busy right now, very exciting. We just want to keep going so we can get noticed by someone who’s willing to take a chance on us. 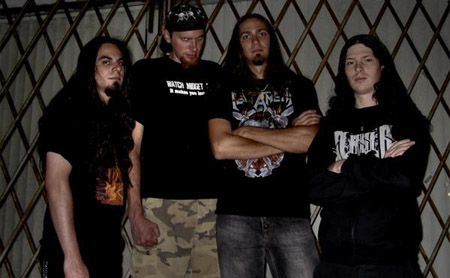 Right on, any words for your fans?
Just keep coming to shows. Keep buying records. PLEASE don’t download records. Keep the scene alive, discover different genres. Have fun and live your life. Come party with us, you’ll have a lot of fun I guarantee it!