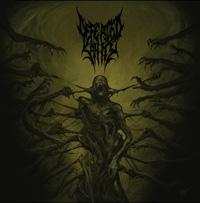 Recorded at Soundlodge Studios in Germany with guest vocal appearances by Frank Rini (Internal Bleeding), AJ Magana (ex-DEFEATED SANITY, Disgorge US), and Brian Forgue (Syphilic, Gutrot) and sound effects performed by Jon Engman (ex-Brodequin), the nine-track follow-up to 2010’s critically hailed Chapters of Repugnance will be paired with a bonus DVD featuring making-of clips, interviews with the band, and sick performance videos!
Said the band of their latest output: “The album has a more old-school vibe to it, with a lot of early ‘90s inspired riffs and slams, but we made it a point to not get away from the technical and progressive stuff as well.”
DEFEATED SANITY offers up a taste of the sonic slaughterfest with “Verblendung” at THIS LOCATION.