Hi Lille whats up , can u tell us the latest news from Defeated Sanity?
Lille: Hey man, I am doing well and we are in the middle of arranging the rest of the Prog EP. It’s gonna be something completely new for all of us and our fans will have to digest it too. I think it’s not typical DS music. But we have already recorded the “Caveman” EP which is brutal death metal madness without anything too technical, we focus more on pure barbarity on that one.
I already know that after this album we are gonna go back to what we are known for. But for me after 4 albums its time to change things up and experiment. That’s the only chance to keep your music fresh and don’t go into a dead end. 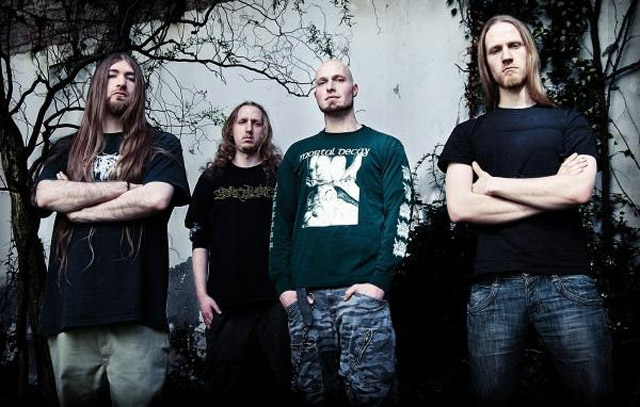 Every band says as cliche our lastest album is the best album ,ofcourse your latest full lenght ‘Passages into Deformity’ is a killer album imo , whats your personal fave albums of Defeated Sanity and why?
I have a soft spot for Chapters of repugnance. The songwriting just went down perfectly and it contains what I call the typical DS style. Passages was great but for some reason I don’t feel it that much anymore. I love playing the songs live but the album….dunno for me something went missing. After all I think all albums aren’t perfect. The only way to get the DS that I want people to hear is to come to live shows. 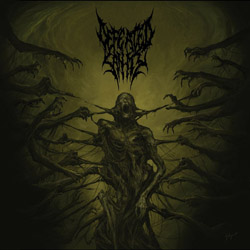 How s your Daily life beside the band activities , you guys are all working or only musicians?
I am doing lots of stuff besides DS of course. I teach guitar and drum lessons, sometimes play payed gigs with soft “dinner” music and stuff, or even play classical guitar on galleries, funerals, etc…Mainly teaching. Also taking care of sending out the merch to people.
Jacob does sound for all kinds of events. For example when politicians are talking in the government building in Berlin, but also concerts…etc..
Chris works with a forklift.
Konni works in construction I think.
Its stressing to get the band together cus of all the work plans and stuff and cus the members live very far from each other.

Can you tell us a bit your label Willowtip Records ! they based in usa , hows their promotion for their bands , do they have some priority bands in this label or they deal same and equal to all their signed bands ?Are there also disadvantages for being into u.s record labelor not ! i mean booking shows or gigs, are they effective in european scene , or just speading the cds to labels and distros around.
I think they have done a great job for what they can do, and I guess after all they are the right label for us. That is the reason why we prolonged the contract for 2 more records. One minus point of having a US label is that when they send lots of cd’s and stuff…..someteims they get stuck at customs, which sucks major balls.

As i know you are the main song writer and composer in the band , its a huge and hard work , hows going song writing process for defeated sanity in general , how long it takes to create one new song , how many times you guys making rehearsals normally?
I have most songwriting ideas. I would say about 80 % of music and 99 % of lyrics are mine. Jacob and Chris have some ideas and I arrange them to make songs. Jacob had loooots of great ideas for the Prog Ep and we work a lot on drum and bass grooves, so its very cooperative this time which I love. Chris always has a few killer riffs that help to make the albums complete. A song always grows with time but most of it is done in 1-3 months.

If we compare the european brutal death metal to American brutal death metal , whats your opinions about this topic?
USA is the homeland of Death Metal and will always have an advantage. But we are part of that family cus we bring our German influences in. German to me is great composers: Bach, Mozart, Händel, Beethoven.
As an example –
Foetopsy’s big strength: Blistering speed. Devourment: Sound, vocals. Defeated Sanity: Composition!

As i know also you are very supportive and creative guy whos helping on drums for other bdm bands like (Abhorrent Castigation , Twitch of the Dead Nerve ,Cenotaph etc.) , how long for you takes to learn songs from other bands and able to record them , how you keep all those mega technical riffs in your mind , do u have a special receipt for this?
Haha for Cenotaph I was still not working so much besides the band, so I actually worked for 3 months hardcore to learn the songs. Abhorrent Castigation I learned in the studio, cus I JUST COULD NOT learn the songs and keep them in my head. So I learned them bit by bit. Zealotry I wrote the songs down on sheets and kinda read them. Twitch of the death nerve I had Tom there in the studio to teach me the songs (which is of course my favorite).

You guys played around globe at a lot of countries ,tell us a bit which country amazed you much more , hows the fan reactions out of europe ,and which other new territories you want to play.
It depends. I love playing big shows, cus there the crowd really gives you something back. Neurotic Deathfest last year was fucking badass, lots of people enjoying brutal shit. Sometimes we arrive in a small as fuck venue and expect 20 people to come, then comes 80 and pack the place. And if its 80 MANIACS that already have your shirts or other brutal bands shirts….that will lead to the best shows ever.
So I will mention that one show in Milano, Italy, or the crazy house show in NYC 2011, or Tokyo 2013, also Athens, Greece 2013. We still wanna explore Asia more, Indonesia, for example! Also haven’t been in Australia yet. South America! AND TURKEY!!!!!!! What happened there? We wanna come over there! haha 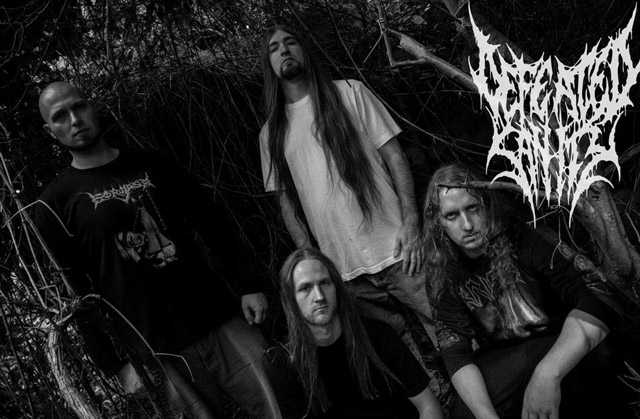 Can you also give some tipps for the other drummers and guitarists ,how long you practice a day or week on drums and on guitars , and some tipps and ideas ,offers abt good song writing and composition for bands?
My first tip for drummers and guitarists is: Get together in one room again please haha. I miss the real band feeling in most new bands and there is too many projects from people from 4 different countries playing on an album. But noone moves their ass anymore to go jam together. Guitarists always write stupid plain drum parts and drummers don’t get to write their own patterns anymore. It’s kinda stupid. That’s what I wanna say about that right now.

Hows the Death Metal Scene in Germany so far , you guys get enought attention from the german scene or other countries are supporting more! Give our readers some of your fave German bands.
We get some attention from Germany yes. But the last two shows were kinda empty. Maybe we have played too many times. Or maybe they don’t like us anymore because we are already known now? No clue. Fave German death metal bands? Old Atrocity, very old Morgoth, Very old Necrophagist (demo), Resection Demo, Despondency……A new project I have played on which is crazy is Abhorrent Castigation. But they are not a band, they are a project….would kick ass if they would really bring that sick shit live on stage. Let’s see what happens.

Which albums you are listening lately , are you stil buying the original albums or download is more easy for you , what do you think abt buying original albums and merch and supporting to bands , are u against downloading of the albums or you prefer to buy original albums and whats the latest albums which you bought ..
I recently got Gorgasm’s last album. It’s sick! Bought Spastik Ink’s first album cus I always just had it on cassette tape. I am not buying that many albums anymore cus I don’t really need it all dunno…it’s kinda disappointing. I am intending on buying all the albums that I had on tape for years and can’t listen to them anymore….for example the first Megadeth album, Primus Sailing the seas of cheese…all that kind of stuff. I never even download any music, dunno never been that kind of guy.

You guys have growing and huge fan base worldwide , how important for you guys ,Fans opinions and hows your relations with the fans at concerts and after concerts?
Well we have a lot of fans worldwide. And there is many different opinions. We would be crazy to ask them for their opinion on how we wanna write music right? Haha Fans in the DeathMetal scene are pretty much friends…if u meet them first your more careful cus they could be annoying or something, but if u meet them many times and they are nice people then they just become friends. It’s as easy as that…its just like when u go to a show and meet people, first your careful and then u get a good feeling with them and become friends…or u don’t like them and avoid them.

What you like or hate most now a days death metal scene?
Lacking creativity. Muscle is more important than brains nowadays. The internet made people lazy. Civilization is getting more and more lazy. Back in the days of old composers they had nothing to distract themselves from music. Then later came TV, now internet. Even I am more chatting on facebook than playing my instrument. It kinda sucks.

Tell us a bit funny or shitty moment ever happened to you during tours or gigs?
It sucks when u play as headliner and u see how 100 people come and pay, but after 3 Goregrind bands u play last and then there is only 20 people left for your show, or u get thrown out after 20 minutes cus the club closes hahaha.
Funny shit, dunno……I think we don’t have lots of crazy stories to tell really, at least I can’t think of them right now haha. 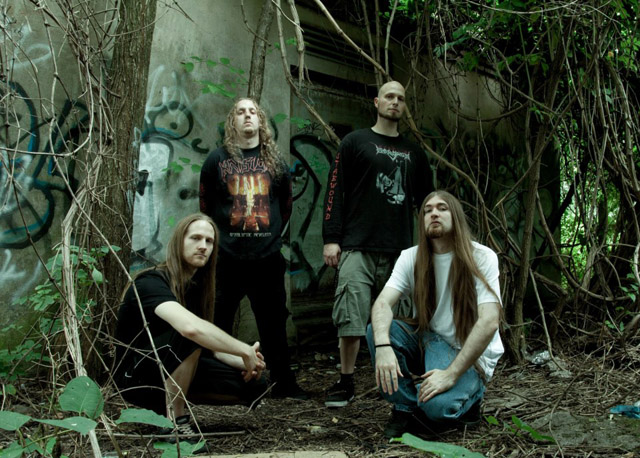 You guys ever been in Turkey personally ?,whats your opinion about Turks who are living in Germany ! Do u have any Turkish Metal Fans there who are also coming to Defated Sanity gigs !
Turks living here in Berlin seem pretty…dunno man…Muslim haha. They don’t offer me anything interesting and I offer them nothing interesting. But I also never had big problems with them like many of my friends. I would like to go to the real Turkey and get to know the interesting people from there, like you bro and Cihan, etc….
And yes there is indeed a few (very few) Metal fans that are turkish and from Berlin, they are family like every Metal dude coming to shows!

Your last words please for Extreminal Web zine readers and Turkish Defeated Sanity Fans ?
Keep it sick and I hope to come to Turkey one day, it would rule to play some shows soon!

Thanks a ot for the interview