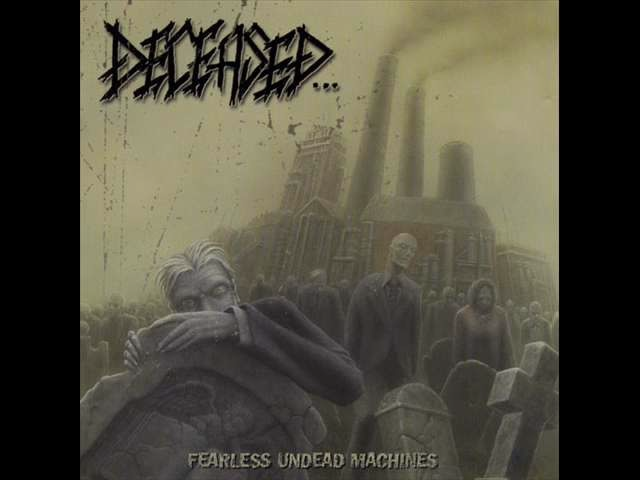 ‘Fearless Undead Machines’ is one of the landmark albums in the thrash/death metal style. While the first two Deceased albums were great, this one just took the band to another level altogether. The surreal zombie concept was phenomenally well done and executed; each of the songs reek of that dread and pensive heart-throbbing atmosphere. The solos continue to be incredibly memorable and inspiring, the vocals shudder with that rare horror-themed conviction, the drumming remains brisk and vibrant throughout, while the guitarists paint a thrilling image of the post-apocalyptic zombie-infested world with some of the most sublime riffs any metalhead will ever hear. Few albums have come close to the ambitious storytelling skills and majesty of this one. Even fewer sound as fresh and exciting a couple of decades later. This is a veritable classic.
The original artwork and sound have been retained on this official reissue authorized by King Fowley, and contains special liner notes and pictures that weren’t present in the first pressing. Experience an unforgettable classic in its original glory all over again.
This is the second release on the new sub-label, Transcending Obscurity Classics, after Greek death/crust metal band Abyssus’ ‘Once Entombed’.
Track list:
1.   The Silent Creature
2.   Contamination
3.   Fearless Undead Machines
4.   From the Ground They Came
5.   Night of the Deceased
6.   Graphic Repulsion
7.   Mysterious Research
8.   Beyond Science
9.   Unhuman Drama
10.   The Psychic
11.   Destiny