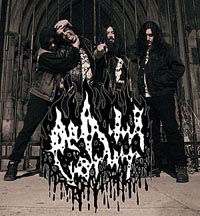 Chilean Deathmetallers DEATH VOMIT have inked a deal with Xtreem Music for the release of their debut album which is actually being recorded for a summer release both on CD & vinyl format.
DEATH VOMIT was born in 2011 in the city of Curico (Chile) by Azazzel (guitar/ vocals) and Evil Escorzized (drums) influenced by ancient beasts with a grotesque, putrid and devastating sound in the vein of classic bands like Megaslaughter, Purtenance, Cancer, Merciless, Carbonized… recording their debut demo “Infestation” in 2012, released only on cassette format. Later on, bass player Tom “evil” Hill, who already played on the demo, joined the band as permanent member, followed by Sebastián Salce (guitar) as well, completing the line up and starting to create new tunes of the most violent and perverse Death/ Thrash for their debut album.
At the moment the band don’t have any official website since they consider it doesn’t fit on the band’s philosophy and so far the only way to contact them is through Xtreem Music. You can listen to the entire “Infestation” demo 2012 below.