French death/thrash metallers DEAD COWBOY’S SLUTS will release their debut album “The Hand of Death“, worldwide on September 19, 2012 via M & O MUSIC.
According the press release : DEAD COWBOY’S SLUTS is a metal band that contrasts clearly with the current scene with their simple and effective music directly issued from the great period of the 90′s. They prove it with their first album, in which their heavy riffs have not finished to make us headbang.
The New album trailer can streamed below. 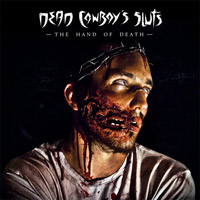