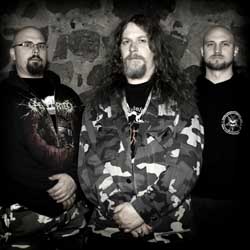 Please introduce yourselves and the band:
Hi! I’m Jörgen Kristensen, the guitarist/vocalist of Swedish death metal band Dead awaken. The band consists of me and drummer Mats Blückert. For live situations, we’re alternating between a couple of session bass players. In the studio, I play everything but the drums. I write all the lyrics and we write the music together.

Why did you chose the band name DEAD AWAKEN? Does the name has a special meaning for you?
Our former drummer, Joakim Edlund came up with the name, after listening to Cannibal corpse. The words dead awaken were part of the lyrics for a song. He thought the name was really cool, so we stuck with it. The name itself doesn’t really have a special meaning to me personally. Except for the fact that we’ve had the name for many years and I tend to identify with it.

How would you describe you music?
Originally, it was Thrash, with a hint of Death Metal. Now it’s Death metal with the occasional Thrash part. It’s often described as old school, I tend to think of it as more timeless. It’s aggressive, with a touch of melodies here and there. A catchy chorus is necessary to us and I try to put some thought into the lyrics. 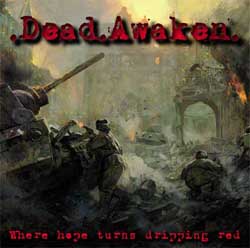 In April 2013 you will release your first full-length cd which is called “Where Hope Turns Dripping Red“ via Abyss Records. Could you already tell us something about its music and lyrics?
Alright, it’s an aggressive affair. For the one’s whos been into Death metal for a while, there may be some obvious influences in there. It’s Death Metal, the way we want Death Metal to be. It’s fast, it’s heavy, it’s occasionaly ugly, as we don’t want things to get too polished. Most of the lyrics deal with war.

Do you also cooperate with other bands / musicians?
Do you mean like side projects,etc? No. Unless it’s a project for a limited period of time. To me personally, it’s one band only. As I personally love the music we write, I have no need to go anywhere else.

Where do you see the band in five years?
Hopefully we’ve released a couple more albums and done a couple of tours. As we’ve been doing this since the late 80’s, it’s not likely that we give things up. 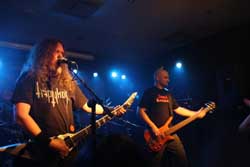 Are any gigs or tours planned for this year?
At the moment, no. Booking shows before your album is released, is a pain in the ass. Hopefully things will start ticking now, with a strong album out. Yes, I know it’s not typically Swedish to say you’re good. But we’re extremely happy with it and we’ll keep pushig our limits.

Any last words to your fans:
Keep supporting Death Metal, we need to keep it extreme! Please check out the album, hope you’ll like it. Thank you!

Many thanks for the interview and all the best for DEAD AWAKEN in the future!!!