According to a Facebook posting from Matte Modin (DARK FUNERAL, INFERNAL, DEFLESHED), Swedish guitarist David Parland (NECROPHOBIC, DARK FUNERAL, INFERNAL) died on March 19 at the age of 42. No cause of death has yet been revealed.
A founding member of the Swedish melodic death metal band NECROPHOBIC, Parland later went on to start DARK FUNERAL and make a melodic and essentialist version of black metal that later worked more occult heavy metal into the mix. After that, he joined INFERNAL and developed their unique style of intensely violent music.
Guitarist Lord Ahriman (Mikael Svanberg) of Swedish black metallers DARK FUNERAL has posted the following message regarding the passing of his former bandmate, Swedish guitarist David Parland (pictured below; NECROPHOBIC, DARK FUNERAL, INFERNAL): 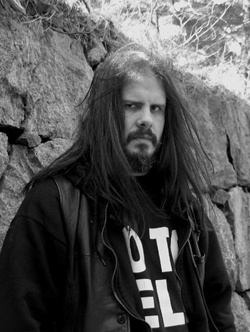 “A couple of days ago I was reached by the terrible news that my old brother David ‘Blackmoon’ Parland had passed away and entered the eternal fire once and for all. It’s taken me a few days to grasp it all. And it still hurts a lot to even think to talk about it.
“During the last couple of weeks, I was in close contact with David. He was going through an extremely difficult time of life, whereof he contacted me to ask for my help.
“Even though the two of us had a bit of a complicated relationship over the years (much excessive in the media though), he knew that he could ALWAYS call or visit me when needed, which he also did once in a while.
“Last time I talked to him was when he called me on March 15. From what I could understand, things were going in the right direction. I also had some very good news for him, which he was very happy to hear about. What happened after that I simply can’t understand. And I cant understand WHY he didn’t call me (again).
“So close, so fucking close to get back on track, brother.
“Why?
“You will be missed deeply! May you reign forever and ever in the eternal hellfire.
“Hail the hordes!”