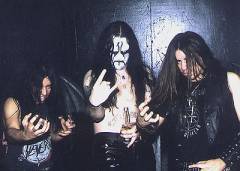 DARK FUNERAL’s new album, “Attera Totus Sanctus”, has entered the Swedish national chart at position No. 35. It has also debuted on the Swedish heavy metal chart at No. 3.

As previously reported, the limited digipack version of “Attera Totus Sanctus” has been delayed until January 2006 “due to a complicated manufacturing process.” The regular edition of the album was released in Europe on October 24 via Regain Records. The CD will arrive in the U.S. on November 29 via Candlelight Records USA.

DARK FUNERAL’s new album was recorded and mixed by Daniel Bergstrand (MESHUGGAH, STRAPPING YOUNG LAD, IN FLAMES, BEHEMOTH) and Örjan Örnkloo (MISERY LOVES CO.) at Dug-Out studios in Uppsala, Sweden between May 23 and July 15, and August 8 and August 19, 2005. Mastering duties were handled by Tomas Eberger at the Cutting Room in Stockholm, Sweden. The CD features a guest appearance by former MESHUGGAH bassist Gustaf Hielm.