Hails and welcome to Extreminal Webzine. As a starter, please present with a few words your band to our readers ?
Grimo: Hey Bro! Thanks for the opportunity to make an interview with Extreminal. we are CYTOTOXIN, a brutal death metal band from Germany. We exist since autumn 2010 and released our debut album in May 2011. 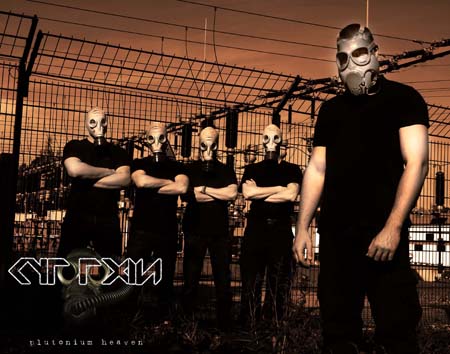 What is the meaning of your band’s name – CYTOTOXIN – and why did you choose it?
Well, we had choosen the tschernobyl desaster as our topic for our debut album. So we searched for a name that the people could keep in mind and also a name that kicks ass! It was also important that the band name has a certain neutrality so that we don’t fixate on one specific topic. I think we made a good decision. That name fits. 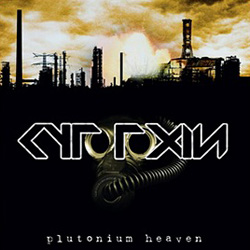 You started the band in 2010 and in 2011 you already have released a full-length album which is not very common among the young bands. So tell us some more about this release – where did you recorded it and are you completely satisfied with the final result? How were the reactions of the fans and the press towards this CD ?
As we had chosen brutal death metal as musical direction we had an intense time with a lot of jam sessions and rehearsals. We worked hard to bring that songs to live an make them sound as brutal as possible. I mean we produced this CD by ourselves and for a “first step” we are almost completely satisfied. There are always things we could improve, we will keep that in mind for our next release (the best way is to produce it in a real studio). Along with the circumstances that we have taken our rehearsal room as a studio we can be satisfied.
Really important for us are the people that got competence and could deal with such a kind of music. And their feedback is really positive. We are proud of this because the music scene flooded with a lot of bands and overproduced releases. So its not easy to get noticed and be treated seriously.

I listened your tracks and I’m really impressed by your technical playing. For how long have you been playing your instruments and have you been in other bands before CYTOTOXIN ?
Fonzo started playing guitar in 2004 and Ollie played drums since 2007. They are both very ambitious and work hard to develop their technical skills. They played in other bands before Cytotoxin but those projects were not serious in any way.

You released your debut album “Plutonium Heaven” by yourselves. Are you searching for a label to work with in the future or you just prefer the Do-It-Yourself approach ?
We are not averse to working with a label and also tried to get a contract for our debut CD. But there was no reaction from them. The labels seem to focus on popular bands which generate money. I mean we could understand this because of the whole download for free shit the labels got a financial crisis. Maybe we get better opportunities when this band grows a little bit and we reach more fans.

Let’s talk about your lyrics. The main subject of them seem to be the nuclear disasters. Why did you choose this topic and what do you think about nuclear power especially having in mind the Fukushima accident ?
It’s trendy in the brutal death metal scene to have bloodsoaked gory lyrics. We don’t wanna be special but for me personally as a frontman and singer i need a topic which allows me to construct a story, a base line or maybe a hidden message. With the lyrics on “plutonium heaven” i just rebuild the happenings of that incident. It’s no statement against or an agreement of nuclear power or the dangerous using of reactors. It is remembering the many innocent victims, the dopey media, the indifference of the government, the abandoned residents, the carelessness towards nature and the veil of the consequences.
As the incident in Fukushima happend we were in the mastering phase of the album. On the one side everything is said to this but on the other side its almost forgotten and ignored right now. Its always the same: Something happens and the world throws the focus on that. The next shit happens and the focus gets changed.
This is also the reason why the human race does not matter and plays no role in the history of this planet (as opposed to what the humanity always imagines to be). We do not understand the profound effects of our actions. Only when it’s too late, we sink into self pity and how bad the fate kicks our ass.
I personally hate the fact that the humans believe that they are the crown of creation.

The only instrumental track in your album is called “RBMK – 1000”.What does the title mean and why did you choose this track for instrumental one ?
This is the type name of the Chernobyl reactor. We play this song live and we firstly named it just “Slam”. So we made a lot of background research for the lyrics and found this name. It’s like a kick in the stomach :-). We make the songtitles after we made the song, not before. This song is live no instrumental. Fonzo and I put guttural vocals on that. On the album it adds atmosphere because of the ambient part and its a good break to get a rest. Just to have enough power to get the head banged with the last song on the album!!! 🙂

There is a picture of the band on your page in metal-archives.com where all of you are wearing gas masks. Are you wearing those gas masks during your live shows and if yes,isn’t it hard to play while wearing them ?
Of course it was thought to support the topic. We also aimed to wear the masks on stage. But there were two major problems: heat and shortness of breath. I had to cut off the filter to get access to the microphone for singing with the mask. But the rubber paralyzed the muscles of my mouth and by the way, it looked pretty damn ridiculous (imagine an unpainted Mexican wrestler). So we dropped this plan and noticed that we have to tackle this issue with the necessary seriousness. It should not be a slapstick show. Some people could get us wrong or misunderstand us. Incidentally, this is not a new idea. So we will come on stage with our true identity and intensity of movement for our stage show. It is no problem for us, we can focus on the music, because this is the main message that can’t be misunderstood.

How does a CYTOTOXIN concert look like ? Do you play live often and where did you had your best concerts ?
It’s hard to explain that. Just look at that video to see how that crowd goes crazy!!!!

We just played 4 shows right now, but we planned more gigs…we try to get as many shows as we can! Every stage must be destroyed! That’s our main philosophy! to swing the wrecking ball in the crowd. Every show so far was great, excepting the first show in Weimar. The Crowd was weak and not ready for the brutal death metal injection. :-p 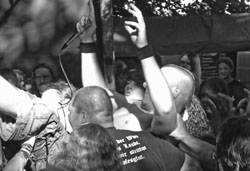 Who are the bands/artists that inspired you to start playing metal ?
My favourite singers are: Angel Ochoa, Frank Mullen and Jan Chris de Koeyer.
My favourite Bands are Suffocation, Beneath the Massacre, Judas Priest, ZZ Top, Dredg and Gojira.

We are in the middle of 2011.In your opinion – which one is the best and which one is the worst metal album that has been released from January ’till now ?
Best album: PUTRIDITY “Degenerating Anthropophagical Euphoria”
Worst album: Illdisposed “There Is Light (But It’s Not For Me)” (This Band turned from “brutal” to “shitty”)

How is the underground metal scene in your hometown ? Are there any yound talented bands (besides you of course)that you would like to recommend ?
There is almost no scene in our hometown. Its a shame to confirm this but it’s the truth. If we make shows here we have to work hard the get 100 people to that concert. So we concentrate on shows in the sorrounding cities and larger cities. They got a metal scene and we some status as an “exotic band”. :-).
I Don’t know if there are talented bands…maybe they hide themselves within the rehearsal rooms. We could recommend “P.R.A.N.K.”. That’s a talented, underrated trash metal band which has a got stage performance and the metal spirit from the the golden thrash metal age. Check them out: www.myspace.com/prankmukke

I think that’s all for now.I wish you good luck with your music! Any final words to those who will read this interview ?
Thanks so much dude! Because of people like you it’s worth to work hard for this music! Never stop supporting brutal death metal and the metal underground scene! Brutal death metal never dies (it’s dead already!)!!! we hope to see you on the road. Let’s destroy the stage together!!!