Last week, the Norwegian Thrash Metallers from CRITICAL SOLUTION announced the special appearances of Whitfield Crane (Ugly Kid Joe) and Andy La Rocque (King Diamond) on their upcoming album. This week, the band reveals the full details for this debut full-lenght.
CRITICAL SOLUTION’s debut CD is titled “EVIL NEVER DIES” and the release date has been set for May 16, 2013.
This debut full-lenght is a concept album and tells the story of Wallace Green: Wallace and his company are sailing to Sad Hill, where he assasinates the king, with his own life to follow. After Wallace’s death, he makes a deal with the devil to live again and becomes the Soulmaker. He does his evil agenda and spreads terror across the world ….
The band recorded again in ANDY LA ROCQUE’s SONIC TRAIN STUDIOS in Varberg, Sweden. Mid 2011, the band worked already with Andy La Rocque, when he produced and mixed their EP “Evidence of Things Unseen”. Also, this time, Andy La Rocque is responsible for the production, recording, mixing and mastering of this album.
Vocalist/Guitarist Christer Slettebø about the whole experience: “To release this album is absolutely amazing! One of many dreams is coming true for us. Also to be so honored to have both Whitfield Crane and Andy LaRocque on the album as guests, well its fuckin’ rad! So it is great to finally get the album out and we hope people will like it!” 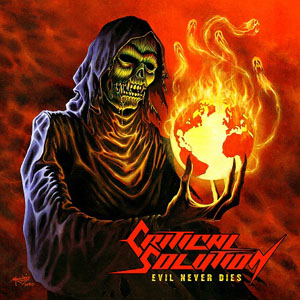