Greetings and welcome to Extreminal Webzine ! As a starter, please present your band to our readers ?
Yudha Leonardi : Greetings from Indonesia, especially from me as the bassist of Cranial Schism. Hail Extreminal Webzine ! I’m happy to answer your questions. Okay, I will introduce my lovely band, Cranial Schism that I’ve made on May 2009. Cranial Schism is the Death Metal band that formed by Hendri Septriadi as the vocalist with guttural and growl character, Putro Tangkilisan as the guitarist, Abraham Simatupang as the drummer, and me, Yudha Leonardi as the bassist. 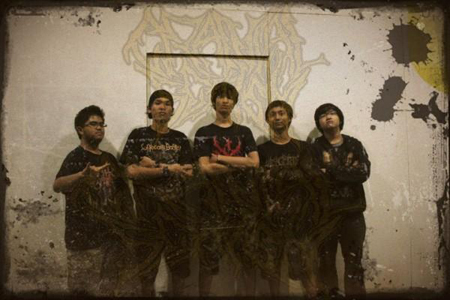 You have two split releases out. Do you plan to record a debut full-length album and if yes – when will it be released ? 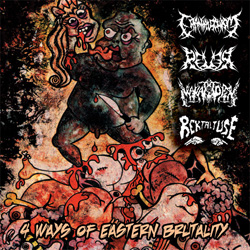 Yes, we plan to release our debut full-length album next year. I hope that plan will be the truth next year.

How does a CRANIAL SCHISM concert looks like? Share some crazy stories from your live gigs.
You must see our performance every our concerts, so you can know it by yourself. There are many crazy stories from our live gigs. If you ever checked our live performance’s videos on youtube page, maybe you will know that Indonesian crowds are crazy. You must see us too because you can see our happiness in our faces. lol 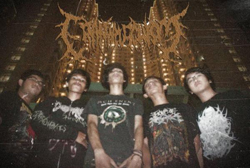 Where do you gain inspiration to write your music and lyrics ? What are your lyrics about ?
Our music influenced by Necrophagist, Dying Fetus, Misery Index, Pathology, and Nile. They are totally awesome bands. But, we won’t make our music like them because we believe that we can make something new and I hope we can be better than them. About the lyrics, our lyrics are about the fluctuation in Middle East from the tragedy of ‘Crusade’ until the last tragedy of ‘Gaza’. 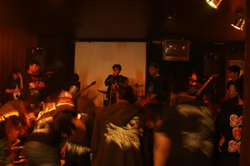 Which is the metal album of 2010 that impressed you the most ?
I think the new album of Pathology entitled ‘Legacy of The Ancients’ made me so crazy. I love every track in their album. I just mean them in this album as the killer.

What do you dream to achieve with CRANIAL SCHISM ?
I just hope that I can make many albums with Cranial Schism and spread the peace with our songs to the worldwide.

Your final words to our readers ?
Thanks for everything Extreminal Webzine. I’m happy for taking the time to answer your questions. I hope that our readers will get our stuff soon. For this time, you just can hear Cranial Schism’s songs at http://www.reverbnation.com/cranialschism and