Reader, you are about to behold the most balls-to-the-wall interview ever published in a webzine. No kidding. CounterIgnition are the shiznit. That means they have a lot to say and most of it is crude and entertaining. On this rare occasion, two of the five potty-mouthed Serbians who play CounterIgnition’s modern Thrash Metal discuss everything to do about uh, CounterIgnition, concerts, and pimping their drummer. Promise, you never saw this coming. 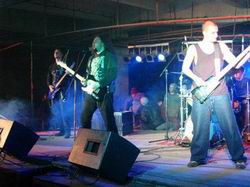 How did you find your name? More importantly, how did the people in the band find each other and decide to form Counter Ignition?
M: It’s a bit complicated. We found our name in a garage! It involved these old Czech motorcycles. You can screw up the ignition so it runs in reverse. You actually get five reverses and it’s called “Kontrapaljenje” or translated literally into English, “CounterIgnition”.
A: And our mission is to counter-ignite the world! So we are CounterIgnition.
M: More importantly, our members used to play in two other bands, Ambush and Strikeback. After these bands disbanded the people who wanted to go on formed CounterIgnition.

Did you always want to play music when you were a kid or did this all just happen when metal entered your life?
A: Actually, yes. I wrote my first song when I was five years old and formed, or at least tried to form, my first rock band back in third grade. It’s true, honestly, hahaha! Metal came later. Actually, it was Punk rather than Thrash, but the first time I heard it, that was it.
M: We always wanted to play music but it only got worse when Metal entered our lives!

So now you have this demo out. Where did you find the studio and the budget to record it?
A: We built the studio ourselves. So the recording only cost us our health, both physical and mental.
M: We didn’t have neither the budget nor studio. We gathered all our equipment in one room and the stuff we didn’t have we made ourselves. And yes, we have this demo out, and it’s the best that we could make on our own with little time and with no money. 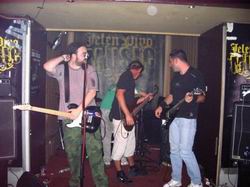 What were your sessions like? Did anyone fart inside the studio? Was there a lot of alcohol? Or were you all sober and really focused?
A: Oh yeah we were. And not just that, but other crazy shit as well. Unfortunately, I can’t talk about it. In the studio we’re pretty relaxed with each other. Actually, what you think is the bass drum are samples of Maxa’s farts.
M: The sessions were mostly on Sundays because we were sober on Fridays, dead drunk on Saturdays and suffering from hangovers on Sundays. Sometimes we couldn’t record because our drummer wasn’t able to hold his sticks in his hands. We also wouldn’t allow him to have sex several days before recording sessions so he would be horny enough to hit the drums like we wanted to, it’s like the way you train a boxer, hahaha!

Does the whole band pitch in when it comes to songwriting or is there just one member for that?
M: Most of the stuff is written by the two of us. We would lay the foundations of the song and then the whole band would come together and work on arrangements and ideas.
A: It usually starts with either mine or Mladen’s riffs, then the others take it further. We do it all together, including the basic rhythms for the drums until we have the 1.0 version. Then Maxa comes in with his ideas on the drums and the arrangement itself, and so it goes on. Every now and then someone comes up with another idea until we reach the 5.6 version or something.

Who are the bands whose music is the foundation of Counter Ignition’s sound?
A: There are many bands that influenced us. From the old school Thrash bands like Metallica, Megadeth, Slayer, Testament, Sepultura, Kreator, Exodus, Anthrax; to the bands from the 90’s like MachineHead and Pantera; to the modern metalcore stuff like Hatebreed, Lamb of God, and Bury Your Dead. And there is also a lot of Hardcore and Thrash/Hardcore crossover influences such as Agnostic Front, Madball, Pro-Pain, Biohazard, DRI, Stormtroopers Of Death, Ratos de Porao. Our inflences also include Progressive Metal like Dream Theater and Symphony X, and even some Serbian Rock/Ethno bands too. Basically all the stuff we like listening to.

Is it still cool to consider yourselves ‘metalcore’ these days? Aren’t you worried elitist Black Metal fans will hate you?
A: Well, metalcore is now very popular and with all the emo kids that are into it, we know it has become very uncool to be called that. However, we’re just too old to think about stuff like being ‘true’, ‘old school’ and shit like that. When we were kids and were getting into Metal in our hometown, none of that stuff mattered. If you were into any kind of heavy, distorted guitar kind of music, but were into it for real, you were a part of the underground community and that was it. For us that is the way it still is. We are thrashers and the music we play is exactly what we wanna play, which is based on 80’s Thrash. But it’s now year 2008 and we don’t want to just copy what was already done more than 20 years ago, which is still better than anyone could do now. We want to take our genre further.
M: We certainly hope that someone will hate us.

What are your songs like? Are they for kids who just got their heart broken by some chick, like Atreyu? Or are their themes more mature?
M: Themes are various. Mostly about life, life in Serbia and life everywhere.
A: Well, if their broken heart makes them go crazy in the mosh pit, then it’s for them too, haha! Back in the day we were more into Max Cavalera "fuck this, fuck that" lyrics. But in time we started writing more, as you say, mature lyrics, that basically express our anger, rage, political and philosophical views, everyday problems, and all the shit that is going on around us. 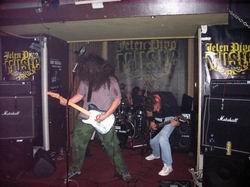 Are there already number one fans of Counter Ignition? Who have given the band the most positive response so far?
A: Every time we play there are more people that come to see us, We also sold or gave away around 100 discs in the last two months so I figure that the number of our fans is still small but it’s growing and that’s what’s important. And when I say fans, I mean people who just like our music and like to mosh, headbang, or whatever when we play. We know most of these people. Some of them are our friends from before and some we met at our shows or people that we hang out after the show. We’re still not the kind of band that has real fans…

Is your commitment to Counter Ignition burning a hole in your pocket and making you poorer? Or do you support yourself with a career outside music that answers for all your band related expenses?
M: Ordinary life in Serbia is burning a hole in our pocket everyday. Everything other than surviving is burning a larger hole in one’s pocket here. We all work really heard so we can enjoy making music.
A: Maxa works as a gigolo to support all the band’s expenses and the rest of us pimp him!

How often does the band rehearse nowadays? Is band practice an intense five-hour affair that you can do frequently or does it only happen when all your schedules are free?
M: Once or twice a week, if we are lucky.
A: We don’t rehearse that much. I don’t think we ever had a five-hour rehearsal. But there’s a two-hour session every now and then, that’s it. We’re professionals, goddamn it! We just don’t need to practice too much because we have this vibe (no, we’re not gay). Almost like we can read each other’s mind. So we click in very quickly.

How come Serbians seem to like their metal very much? Are you competing with the fanatical Iced Earth fans from Greece?
A: Serbs are like Einstein’s Theory of Relativity, really hard to understand. I don’t know, really. I guess everybody likes what they can all their own, what they can relate to… especially if it’s a good band.

Would there happen to be any Biomechanical fans in Counter Ignition?
M: I’ve never heard of them!
A: I heard them on myspace. It’s a rather interesting band, to say the least.

Can you name other Serbian bands we should be interested in?
M: No.
A: They all suck! 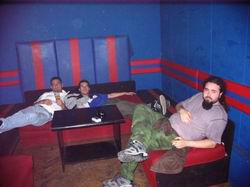 Did there used to be any restrictions on music, especially metal, even after the Communist era? Do any of you remember the chaotic early nineties and how it reflected on the metal scene?
M: Today we live under a democracy so we don’t have any restrictions. We all live our lives the way we want to and we are all satisfied with the way things are here. As a matter of fact we don’t know why we make Metal music at all (there are no democratic policeman pointing a gun at our heads while we say this).
A: We also want to thank the people that brought the democracy to us becuase we didn’t have any idea how good it now is for us.

Are there a lot of open-air festivals in your part of the world?
A: We still don’t have big metal open-air festivals here though we do have "Exit", where you can hear a lot of Serbian and a few globally famous bands. We had Slayer a few years ago and I think that’s it. We did have a really great fest this year called "Legacy Fest" with Testament, Obituary, Rage, Destruction, and some other great bands. Though it wasn’t an open-air festival it was great anyway.

Do you have any idea how many gigs CounterIgnition has played? And what kind of venues and crowds are there for your kind of music? Is there a lot of moshing?
A: We had about 10 gigs in the last four months since we recorded the demo. You always wanna play more, but I think this is okay for a bad like us because we didn’t play much before we did this demo. This is simply because no one will call you to play if they have never heard your songs. Our gigs are usually small venues but with great crowds of people who are into this kind of music. You can see old school metalheads, metalcorers, hardcore fans, even punk rockers at our shows and they’re all moshing, slamming, headbanging and stuff like that.

Has any member of the band recently gone clubbing?
A: Our former bassist was into that, but we kicked him out. Hahaha!

Thank you for this interview Counter Ignition. Can you share some bad words in Serbian? How do you say ‘cunt’, for example?
M: Kurac, picka, govno, sisa! (In the same order, cock, pussy, shit, and tit.)
A: Cunt would be "kurva", "drolja", "fuksa"…something like that I guess.
A and M: Well, thank YOU for this interview, and for supporting us—cheers!!!