You have a new album out called „Mammons War”. Why did you chose this title to the album? I mean, are the Bible and / or human greed recurring subject matters in the lyrics? Or maybe you thought that song was one of the best tunes musically and lyrically?
Dan “Fodde” Fondelius: The latter or so it seems. The decision on the title came rather late. But as time went on and we progressed with the recording, it became obvious that this song had a special feeling of its own. Also I think that – although I’m proud of all the lyrics – this is the one that came out really great. I used some Bible stuff for inspiration with this song because it is written in the Bible of the time that we live in – but I put in my political view as well because now that the East has collapsed, it seems that there is no balance anymore and the whole world is capitalistic or market economy based. The world must change from that kind of economy or else it will just perish. It’s based on greed. The third world is starving and even if you look at our countries, people are losing their jobs so it’s becoming clear that this kind of ecenomy does not work. The only solution that I see is that we have to abolish the governments in all countries. People have to decide themselves what kind of future they want to have because if we leave it to the politicians we won’t have it. They’re mad.

Religion is one of the most frequent issues that you deal with in your lyrics. To what extent have your approach to religion and your view on the world changed during the years?
I think politics and religion are linked together. Basically, I’m an existentialist, that’s my spirit and feeling. As a lyricist, I find the language very powerful so I use that kind of stuff for what I want to say. But, of course, there has to be something else, something more than that as well, and I’m looking for it. I don’t think we are all alone here… 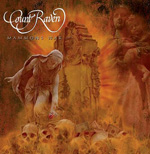 „Mammons War” became the album of the month in the German Rock Hard Magazine. What other reactions have you got to the CD?
There’s been a lot of that kind of reactions. We were voted number one album of the week in Finland and we were second in the German Metal Hammer Magazine after Slayer. That’s not bad… We’re getting some recognition at last because we have struggled for so many years in a way.

What was the reason the band broke up in 1998, after the „Messiah Of Confusion” album?
The main reason was that we have brought out four records in a rather short time so it was an unbelievably hectic period. Also the record company (Hellhound Records from Germany) ripped us off. They took our money and went abroad. Then they went bankrupt. And there were a lot of other bands whose money they also took. We were young and stupid… We even had conflicts within the band. We were frustrated with the situation and didn’t know how to handle it so we get to each others throats instead of doing something constructive about the situation. 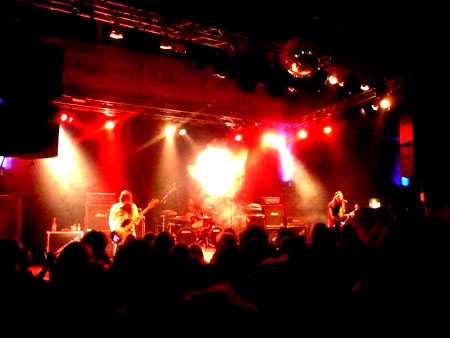 Was „Messiah Of Confusion” the last release of Hellhound Records?
Yes it was.

You surely know that several releases of Hellhound Records, including some of your albums, have been reissued.
I heard about it but I haven’t seen them. 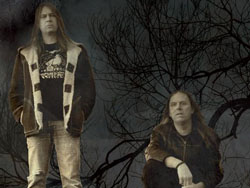 What would you tell us about Doomsday Gouvernment, the band you formed with your current drummer Jens Bock after Count Raven broke up?
I already knew Jens when I left Count Raven. We featured on some compilation albums but couldn’t get a record deal. We made a 12 track studio thing and we thought it would be a great album but it never appeared because we couldn’t get deals. But maybe we’ll try again…

What do you think about the fact that classical / old school doom metal scene is getting more active again? Candlemass released their second album with Robert Lowe, Trouble and Pentagram just did a European tour together, and so will Saint Vitus…
The funny thing about it is that I think everything is connected concerning the reason why these bands reunite. And it’s not just them but a lot of bands from other genres as well. When we started in the late 1980s / early 1990s, it was very hard to get a record deal and booking wasn’t really functional. Now the underground companies have risen up and got the connection to each ohter. Since 2000, it’s just been exploding so it’s easier now to get a record deal. People want to go for it and even the industry itself is more interested and works harder for it. And, of course, the bands want to play…

How did you manage to get a deal with I Hate Records (also from Sweden)?
By accident, really. We were out looking for a record company. Then we had some interest and our bass player (Fredrik Jansson) mentioned I Hate Records. I was like: “I Hate Records? You can’t have a record company called that, it’s impossible.” But I got curious about them so I contacted them. One of the guys is a huge Count Raven fan so we worked it out. 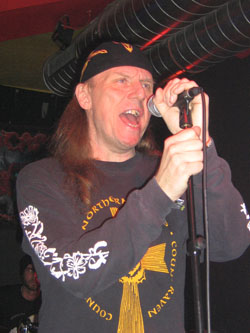 One of the most important distinctive features of Count Raven is your Ozzy-like vocals. I think you got used to this comparison during the years.
Oh yeah. It’s been a real nightmare for me actually. And you may not believe me but that guy has never been in the picture for me. I admire him and Black Sabbath but I never copied him or even thought of that. I think the thing that connects us is the nasal style of singing. If you look at Kurt Cobain, Geddy Lee or Burke Shelley from Budgie, they all have this high pitch voice.

Do you think there will ever be another Black Sabbath album and tour with Ozzy again?
No, I have given up that idea. I was kind of disappointed when they didn’t do an album together after the reunion. I watched them live and they were absolutely fabulous.

Sweden has always been very strong in any musical genre and not only in rock / metal music. What is the secret?
I really don’t know… Maybe it’s the sound. Obviously, we’re very moody up there which has something to do with the climate. Even ABBA was moody in a way… But it’s also about experimenting, everybody is trying to find new approaches. And, for some reason, there is a Scandinavian sound. I really don’t know why but you can hear that it’s coming from Scandinavia, no matter what kind of music it is. As for me, I’m very much inspired by Swedish and Northern folk music, I listen to it a lot and sometimes transform it to the riffs, at least to the feeling… So, people try to find new ways…