We tried to talk about doom/death metal,life, metal market-underground- bands with The guitar-vocalist of the Japanese doom/sludge death metal band Coffins, Uchino. He said that his english is not very well but still we had a great conversation . Hope you’ll also enjoy readıng.. 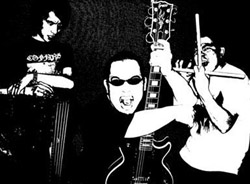 Hello Uchino, What things you are busy with Coffins nowadays? I think you have some special preparations for Maryland Death Fest.?
Yeah we added a new drummer “Ryo” this year. So we are doing the practice to raise the performance synchronized rate with him repeatedly for MDF VIII. Our some recording schedules has been largely delayed by this member change. We are desperate now to regain the delay… haha!!

In which year the band was formed, as gathered info on internet, it says formed in 1996 but your very first demo recorded in 2000. What kind of things had been lived since then ?
The demo 2000 is NOT formal release. It was used to send it to some friends. At that time in 2000, we were playing the Doom/Sludge rock style sound. We were junk bands such as old Swans and Godflesh before that. (Recently I started again the junk band like old Swans named “CYN” with Ryo. Check it!!) Afterwards, we did the activity stop soon. When starting again in 2003, we were changed into a current Doom/Death style. (As so many releases, I omit our discography.)

You have an album which is named “Sacrifice to Evil Spirit” and limited only in 1000 copies.A Venom cover song in the album,whose idea it was playing ?
It’s my idea. Also the sludge band I played before played a Venom cover, but I didn’t understand the song choice by the other member. So I was going to play the Venom cover by my song selection in this band. Last year, US label “Torture Garden” released this Venom cover and live take version on a 7’ep single. It was killer!!

Right after your debut album “Mortuary in Darkness” how were the reacts of fans about the album ?
Excellent!! It was beyond my expectation. Especially many overseas fans seems to have accepted it friendly. At that time, our releases were not accepted in Japan. Because there were few fans that were able to understand our sound. Recently it has been somewhat improved haha!! 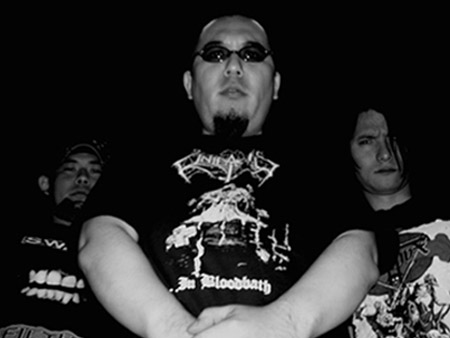 It is obvious that your music has a massive doom influence. Which classick doom metal bands you are influenced ?
WINTER!! The influence of this band is the biggest for us. Optionally we were influenced from many doom/sludge bands like Saint Vitus, Melvins, Pentagram, Candlemass, old Cathedral, Eyehategod, Buzzoven, Corrupted and many more… 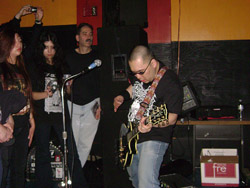 I read that you participated in Japan Extreme Metal documentary, you got any invitation for this or a searcher found you ?
No… first as I intended it to be released DVD as a movie, we accepted an interview. But the plan seems not to have been realized after all, and the producer uploaded it to Youtube quietly. Maybe the producer is still looking for the deal for DVD!? So I think that there are few people knowing this movie.

I know that you are mostly arbiter in underground scene, In Japan the bands,which I have especially been listening to have a certain old school line and I have not yet heard any trendy band, i think Japanese heads really care about this ?
Arbiter? No way, we are the existence that loosened in the scene very much haha!! There are a lot of Japanese old school line bands. If I say about only doom & death metal, you should check the bands like… death: Anatomia/Butcher ABC/Zombie Ritual/Defiled etc… Doom: Corrupted/Church Of MIsery/Eternal Elysium/Garadama etc…

In future , what kind of a place you would wanna take a part and see your band doing; more doomy mooded or more in plain death metal line ?
We were born as the band located in those middle. So we will act at the same position in the future. I mean… it’s the doom/death style!! Our next album will become strong in a doom/sludge element. But of course we don’t do a big route change. Expect it.

What is your lyrical inspiration for Coffins? What are the lyrics about?And what do you share us as your personal thoughts about the death and the life and religion?
I’m writing all lyrics. My lyrics have received the inspiration from many movies, arts and comics, and also are influenced from the social environment. Because a thing that is stranger than the fiction happens in a real society.

How religions effect the society in Japan,especially can you give any information and observation for the view point of Japanese people about religions?
A Japanese religious culture seems to be chaotic. Various religions (new religion and cult) are scattered in detail. But also there are a lot of atheists, especially the young guys. I think that the influence has infiltrated daily life because Japan is basically a country of the Buddhism.

Ever thought about coming to Europe, any fest you really would like to take part ?
Yeah!! we want always to do the Euro tour of course!! Also we would like to play in the Roadburn fest and the Obscene Exreme fest and many more!!

Would you like to say something to Extreminal.com readers ?
Sorry for my poor English haha!! See you!!
Our website ( www.coffins.jp ) or myspace ( www.myspace.com/intothecoffin ). Check it up.