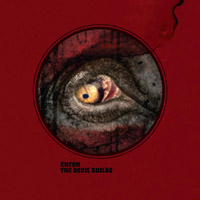 Tracklist:
01. Faustian Resolve
02. Scavenger of a Dead World
03. Gods of The Flesh
04. Rise Black God
05. Death Awaits
06. Contagion (The Disease)
07. Lord and Master
08. Nithon Undertow
09. Ratbag (Abscess cover)
10. Babalon and The Beast conjoined
“The Devil Builds” was recorded and produced at Morningstar Studio with Arnt Obsidian Grønbech (Keep of Kalessin, Satyricon) at the helm. The album was mixed by Stamos Koliousis (Djerv, Mencea) at 210 Studio in Berlin, known for earlier work with Nattefrost, Gehenna and Vreid, among others.
Chton has previously shared stages with bands like Morbid Angel, Behemoth, Mayhem, Amon Amarth, Zyklon and many others, and plans are being made for a European tour to promote the release of “The Devil builds”.
The digital split-single “Screaming for Death” (with Cleaver) is still available for streaming or download from most digital stores like Spotify, iTunes, WiMP, Amazon and many others.