“Cancer Eradication”, the very long awaited 2nd album of CHRIST DENIED, one of the most talked about returns in the Brutal Death camp, is totally finished and ready for its release next 15th of June as previously announced. Just 2 weeks after this, the band will perform their very 1st show ever on their almost 20-year history!! This will be at the MOVE YOUR FUCKING BRAIN FEST in Barcelona, followed a week later by OBSCENE EXTREME FEST in Czech Republic and later on, in October, at the RITUAL ZOMBI FEST in Madrid.

The band is absolutely satisfied about how the production of the new album turned out, achieving a truly crushing, brutal and heavy sound, making of this album a fucking sonic bulldozer, an absolute madness of blasts and unparalleled guttural delirium!! 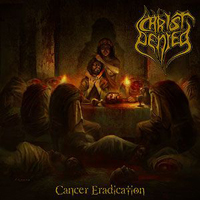