CHAOS INCEPTION, the Alabama based death metal band, has just released its second album “The Abrogation” via Lavadome productions. 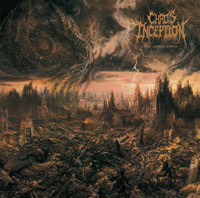 “The Abrogation” offers 9 tracks of utterly extreme, blistering death metal mastery. With this new material, Chaos Inception continue to push the Floridian/Brazilian style of Death Metal even further into its own identifiable realms of extremity and originality while still remaining heavily rooted in the traditional conception.
Fans of Nile, Morbid Angel, Krisiun, Angelcorpse, Immolation, Hate Eternal, Behemoth and the likes should prepare themselves for a blast because “The Abrogation” has just arrived!
Listen to three new songs from the album by clicking here.
The album was recorded in Stargate Studios during Fall and Winter, 2011, and mastered in Mana Studios in January, 2012. The album artwork was drawn by Italian painter Paolo Girardi.

ABSENCE OF THE SACRED ''Come Hither O Herald Of Death''