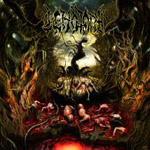 Comments the label: “SevaredRecords is very proud to announce the signing of Turkey’s most brutaldeath metal band, Cenotaph!! In early 2010 they will record their highyanticipated 5th full length album. Incredible Ultra Guttural Brutalityat it’s finest!! You are warned!!”

The cover artworkfor “Putrescent Infectious Rabidity” has been done by Studio Sho and isby the label described as “Fucking sick!!!”. The album will be outsomewhere in Summer 2010.