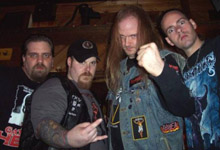 Ibex Moon Records has announced the signing of Chicago’s CARDIAC ARREST. The band’s third full-length album, “Haven For The Insane”, was recorded in the winter of 2008/2009 at Kai Kauffman’s Polymorph Media Studio and is scheduled for release on May 25.

A video trailer for “Haven For The Insane” can be viewed below.

A track from the album, entitled “The Blade That Reaps”, is available for streaming on the CARDIAC ARREST MySpace page : www.myspace.com/deathrot