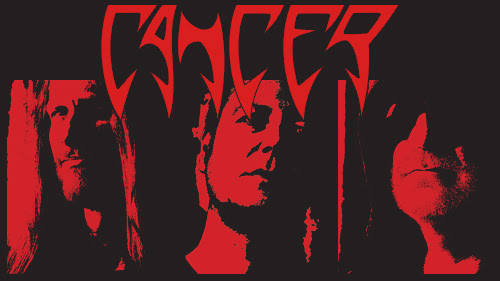 The brutal new studio album from the reinvigorated U.K. Death Metal band Cancer, reuniting the core original trio of John Walker, Carl Stokes and Ian Buchanen. Coming 2nd of November. Includes free exclusive bonus ‘Crocodile Itch’ digital track download, delivered on release date with each CD or VINYL pre-order of ‘Shadow Gripped’ from peaceville.com
One of the UK’s premier death metal purveyors of the late 80’s and early 90’s, & responsible for such genre classics as ‘To the Gory End’ (1990) & ‘Death Shall Rise’ (1991), Cancer marks 30 years of existence with their sixth full length studio album, reuniting all three original core members – John Walker on guitar/vocals, Ian Buchanan on bass and Carl Stokes on drums – for the first time since 1995.
‘Shadow Gripped’ features ten songs of brutal old school death metal, and was recorded at Foel studios, with Simon Efemey (Paradise Lost, Napalm Death, Amorphis) handling production and mixing duties alongside the band. Also features a guest appearance from Anders Nyström of Swedish deathlords, Bloodbath, who comments:
“Believe it or not, but Katatonia used to play a Cancer cover in our early live sets, yup that’s right ’Burning Casket’! We then saw ourselves go on and form a little death metal band based on the opening track of ’To The Gory End’, and hey we all know that one, don’t we? Last year we ended up recording this song and put it out on a 7” ep and I thought it probably won’t get any better than this, but it did, as I was given the honour to put down a guest solo on their new ball-cutting album! CFC is back and it has me even more stoked than Carl is Stokes!” 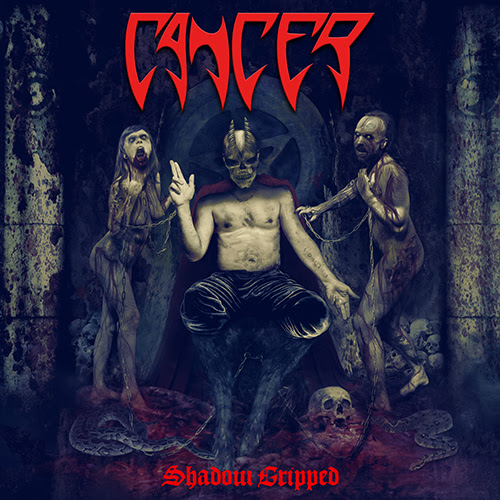